“A Quiet Passion” recently premiered at the Sedona International Film Festival to rave reviews and top audience ratings. It is making a return to Sedona by popular demand.

The great and singular poet Dickinson requires a one-of-a-kind filmmaker to tell the story of her life, and in Davies she has found a soulmate. Davies exquisitely evokes Dickinson’s deep attachment to her close-knit family along with the manners, mores and spiritual convictions of her time that she struggled with and transcended in her poetry. 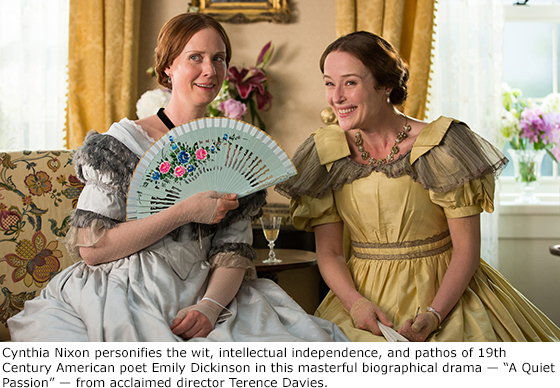 The film follows the poet from her rebellious college days to her increasingly reclusive life in the bosom of her family, eventually to her painful death.

As Dickinson, Cynthia Nixon gives a career-defining performance that captures the acerbic wit, ferocious independence and increasing bitterness of a woman whose genius went unrecognized in her lifetime.

“A Quiet Passion” is a film of both scathing social satire and tragic grandeur.

“One of the most unique and mesmerizing films of the year.” — Jordan Hoffman, Vanity Fair