Sedona AZ (June 11, 2016) – The Sedona International Film Festival is proud to present the Northern Arizona premiere of the acclaimed new music documentary “Sound of Redemption: The Frank Morgan Story” showing one day only: Wednesday, June 22 at 4 and 7 p.m. at the Mary D. Fisher Theatre.

For three decades, in the jazz clubs and recording studios of Los Angeles, anyone could tell you that Frank Morgan was one of the best saxophone players around. But if you wanted to hear Morgan play live, you would have to go to San Quentin State Prison. The former whiz kid, who once seemed destined to step into the shoes of groundbreaking saxophonist Charlie “Bird” Parker, instead spent the better part of 30 years in a series of jail cells, a convicted thief and an addict. 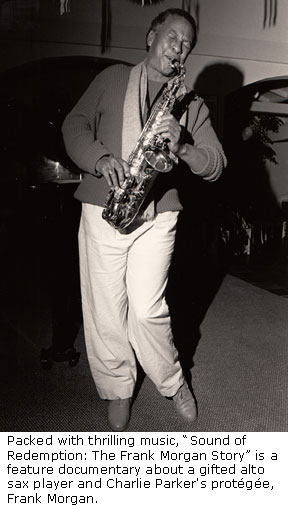 In the new documentary, “Sound of Redemption: The Frank Morgan Story”, director NC Heikin recreates the life of Frank Morgan in concert form, tracing his progress from teenage musical prodigy to hardcore junkie and, finally, to one of the music world’s most remarkable comeback stories.

A one-night-only, all-star musical tribute filmed live at San Quentin forms the backbone of a film that brings together the past, present and future of Morgan’s musical legacy. Moving seamlessly between the thrilling live performance and the riveting true story of a musician whose talent first destroyed and then redeemed him, the award-winning filmmaker paints a searingly honest portrait of a prodigiously gifted, tragically flawed musical genius.

The film also uses first-person interviews with Morgan, his friends, family and colleagues, archival photos and film, and commentary by music historians and musicians to reveal the heart of a complex and talented man.

“Sound of Redemption: The Frank Morgan Story” will show at the Mary D. Fisher Theatre on Wednesday, June 22 at 4 and 7 p.m. Tickets are $12, or $9 for Film Festival members. For tickets and more information, please call 928-282-1177. Both the theatre and film festival office are located at 2030 W. Hwy. 89A, in West Sedona. For more information, visit: www.SedonaFilmFestival.org.