In “A Bigger Splash”, rock legend Marianne Lane (Tilda Swinton) is recuperating on Italy’s volcanic island of Pantelleria with her partner Paul (Matthias Schoenaerts) when iconoclast record producer and old flame Harry (Ralph Fiennes) unexpectedly arrives with his daughter Penelope (Dakota Johnson) and interrupts their holiday, bringing with him an A-bomb blast of nostalgia from which there can be no rescue.

As Harry’s plan to win back Marianne become apparent, Penelope tempts fate by attempting to seduce the increasingly frustrated and jealous Paul: tensions rise throughout the volcanic paradise.

“A Bigger Splash” is a sensuous portrait of desire, jealousy and rock and roll, under the Mediterranean sun. 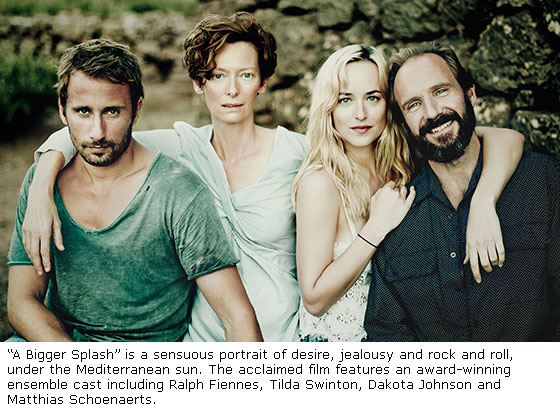 The Los Angeles Times calls the film “a swooning cinematic appeal to the senses”, and the New York Post calls it “a steamy and satisfying kickoff to the summer film season” and People Magazine says it is “a delicious and sexy thriller!”