Romance Is Afoot at Movin’ On Gallery

Sedona AZ (February 1, 2016) – February is the month of love and romance, and no place in Sedona embraces that spirit more enthusiastically than Hillside’s Movin’ On Gallery.  The venue will be highlighting two artists whose works embody the season’s atmosphere of amour and passion.

Both artists will be on hand at Movin’ On’s First Friday reception at 5-8PM on the evening February 5, 2016.  The public is cordially invited to stop by to meet the artists and hear about the romantic inspirations behind their latest works.  Many of the venue’s 16 other artists will also be on hand to host the evening and greet the public. 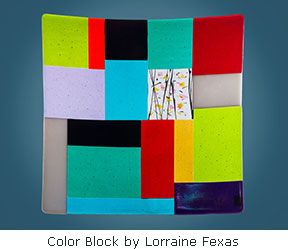 Originally from New York, Lorraine Fexas moved to Sedona in 1999 and immediately jumped with both feet into the local art scene.  Studying at the Sedona Arts Center, she quickly mastered the essence of glass art and before long became one of the best known and most prolific local practitioners in that medium.

Her works are exhibited in several galleries in Sedona, Flagstaff, and Jerome, and she has been commissioned for a variety of art installations and collections nationwide.  In addition, she was featured on the lifestyle television show “Your Life A to Z”, demonstrating her glass cutting and fusing techniques.

Always seeking to experiment and diversify, Fexas currently designs fused glass plates, bowls, wall pieces, jewelry, and other decorative and functional items, using the full range of art glass.  A wide variety of these pieces will be on display at Movin’ On. 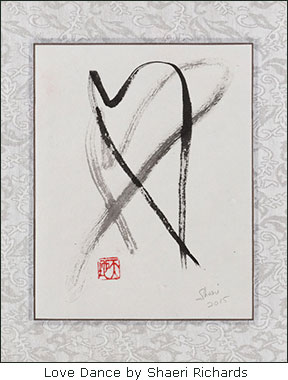 Shaeri Richards is best known locally for her work as a filmmaker, improvisational theater artist, and musician, but her work in those areas represents only a fraction of her remarkable creative range.

As a radio and television journalist, she wrote, directed and produced a PBS documentary that aired nationally; wrote, edited, and narrated several award winning radio documentaries; wrote, directed and edited an award winning short film; and authored an award-winning spiritual self-help book called “Dancing with your Dragon: The Art of Loving your Unlovable Self.” She continues to support people on their spiritual journeys with her work as a coach and certified hypnotherapist.

And as if that weren’t already enough, Richards has also been developing her skills as a visual artist for the past several years, sparked by the teachings of Alok Hsu Kwang-han, a Chinese Zen Master Painter living in Sedona, who was also the subject of her latest film, produced jointly with her husband.

Richards’ Zen paintings are created through a meditative process in which each painting is inspired by an essence or quality.  In honor of Valentine’s Day, the paintings in her Heart Art series are infused with the spirit of love and tenderness.