Roger Clark on the “The Good, the Bad, and the Ugly”
at KSB November 9

Members, residents and visitors are all welcome to join Keep Sedona Beautiful (“KSB”) at 5:30 p.m. at its historic Pushmataha Center on 360 Brewer Road. The evening will include complimentary appetizers donated by El Rincon Restaurante Mexicano and refreshments provided by KSB.

According to Mr. Clark, “It’s been a good year for Grand Canyon… The U.S Forest Service rejected a developer’s application that would have allowed the gateway community of Tusayan to double in size, and before year’s end we may see a presidential proclamation that will permanently ban new uranium claims in Grand Canyon watersheds. The bad news is that uranium ore trucks will soon be barreling down the main highway into the park, filled with high grade ore from the recently opened Canyon Mine. Ugly news includes an invasive and rapidly multiplying herd of cattalo that’s turned the beautiful meadow at the park’s north entrance into a barren field of buffalo pies (oh my!). In other news, the Navajo Nation may be poised to kill a six-year-old proposal to build a tramway into the confluence of the Colorado and Little Colorado rivers … We’ll try to sort out what all this means – and have some fun doing it.” 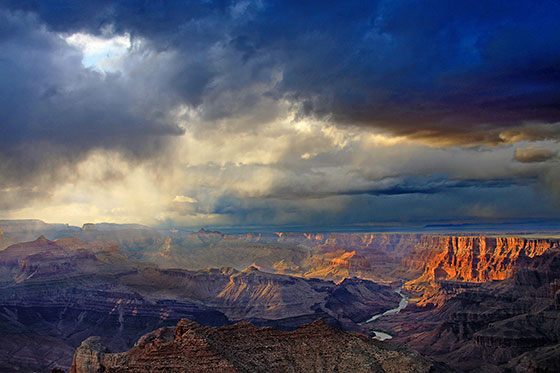 The Grand Canyon Trust is a regional conservation organization based in Flagstaff, AZ. Mr. Clark is currently involved in stopping Grand Canyon Escalade, challenging the opening of Canyon uranium mine, and preventing new wells in Tusayan from further jeopardizing Grand Canyon’s springs from going dry. He was recently quoted in National Geographic’s article: Are We Losing the Grand Canyon?<http://www.nationalgeographic.com/magazine/2016/09/grand-canyon-development-hiking-national-parks/>

Mr. Clark has more than 35 years of experience as an environmental advocate, educator, and guide throughout the western United States and Mexico. He is a native Arizonan who graduated from Northern Arizona University with an undergraduate degree in forestry. He earned graduate degrees from Yale University in natural resource policy and philosophy and served as an assistant professor in forestry at the University of California at Berkeley. He returned to Arizona in 1981 and served in K-12 schools throughout Coconino County as an environmental educator and curriculum specialist. He joined the small staff of the Grand Canyon Trust in opening its first headquarters office in Flagstaff in 1989. In 1995, he received the Ben Avery Award from Arizona’s governor for “outstanding contributions to Arizona’s environment.” Beginning in 1994, he served as the director of public programs and exhibits for the Museum of Northern Arizona (MNA) and later as project manager for Northern Arizona University’s Center for Sustainable Environments.

Upon returning to the Trust in 2005, after a 10-year hiatus at MNA, he assisted in building a broad consensus to secure the 20-year ban on new uranium claims in Grand Canyon watersheds that Secretary of the Interior Ken Salazar ordered in 2012. He has written numerous articles about the natural and human history of the Colorado Plateau and contributed essays to A New Plateau: Sustaining the Lands and Peoples of Canyon Country, published in 2004.

Keep Sedona Beautiful’s monthly Preserving the Wonder(tm) Speaker Series is held the second Wednesday of each month from September through May. It focuses on presenting a diversity of programs relevant to the unique environment of our region.

Keep Sedona Beautiful, Inc. is a nonprofit organization that, by acting through the stewardship of its members and volunteers, is committed to protecting and sustaining the unique scenic beauty and natural environment of the Greater Sedona Area. For more information about Keep Sedona Beautiful, please call 928.282.4938, or visit http://www.keepsedonabeautiful.org/.