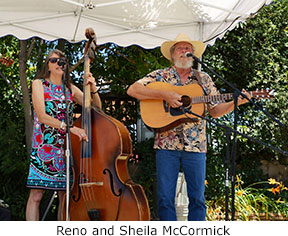 Reno and Sheila McCormick have been playing together since the 1980s. From Colorado to California to Arizona they have played at festivals, fairs, clubs and gatherings.  They feature singing and flatpicking by Reno on his Martin guitar, along with Sheila’s cool and traditional upright bass and great vocals. You might even see Reno throw in some fiddle, dobro, mandolin and banjo.  Together their tight vocal harmonies and inventive instrumentals are the hallmark of a seasoned duo. 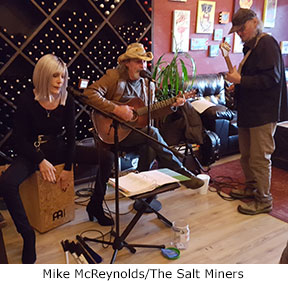 Mike McReynolds is a well respected Camp Verde singer/songwriter who has been making music since the age of 12. His talents have allowed him to participate in some of the most prestigious music festivals in the U.S. His love of music and collaboration run deep.  His Salt Miners trio is a new collaborative effort headed by Mike McReynolds and includes JR Robusto and Nora Bolles.

Nora Bolles is a transplanted, east coast city slicker who moved to the Verde Valley and has immersed herself in the rich musical scene. She is best known for her range of vocal stylings and percussion work with The Raven Sisters, and can often be seen sitting in and jamming with other area bands.  JR Robusto has a lengthy musical pedigree and is a very familiar face as a performer in solo and group gigs in the area, and has recently played at the Hub providing virtuoso accompaniment for Devin Angelet. A long time Verde Valley resident, he is best known for his accomplished guitar and edgy vocals. JR holds true to his country, east coast roots and uses this to add subtle color to his playing. These 3 unlikely musical amigos started casually jamming at some farmer’s markets last summer and liked what they heard….So will their appreciative audience.

Come and experience the power of Bluegrass and folk/rock with Reno and Sheila McCormick, and Mike McReynolds/The Salt Miners in two exciting sets on Friday, April 12th, 2019 at 7pm at the Hub. Tickets $10 and doors open at 6.30 pm.