Sedona, AZ (October 28, 2011) – The Sedona Police Department received several calls on Thursday evening, October 27, 2011, reporting theft of magnetic car signs and yard signs supporting a YES vote on Proposition 410. According to Lin Ennis, co-chair of Voice of Choice for 89A which supports a YES vote and local control of 89A, “The magnetic signs were stolen from the cars parked at the library where a Prop 410 seminar was taking place. It may have been a coordinated strike from the opposition, since signs were stolen from at least four cars. Yards signs along Dry Creek Road were also taken.” 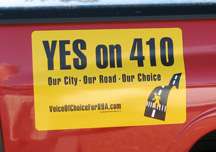 Earlier Thursday, theft of yard signs along Thunder Mountain Rd was reported by a resident favoring a YES vote on 410. Another YES sign was defaced with the words “NO WAY” scrawled across the sign. A magnetic sign was removed from a car parked at the library Wednesday and “mud was stuck to the car door in its place.”

It is against the law to remove or deface election campaign signs. According to Ennis, “The opposition is consistently exhibiting unethical behaviors that should cause people to question voting in their favor. If they have to steal our signs to gain a political edge, can you trust what they say?”

A new city law permits campaign signs in the city right of way, which extends several feet from the street into the property. Voice of Choice for 89A added this message to some signs that have been removed, even though the adhesive label stated the sign was placed legally in city right of way. There should be 190 yellows signs on the streets, mostly in West Sedona.