Cornville AZ (March 11, 2016) – While on patrol keeping our communities safe overnight, a YCSO deputy stopped a 1991 Gold Honda Accord on March 4, 2016, around midnight at the Cornville County Market in the 9400 block of Cornville Road, Cornville, AZ. The Honda had been observed speeding which was confirmed by radar. 3 males were inside the car including the front seat passenger, 25-year-old Tommy Ray Wallace Jr. from Rimrock. During initial contact with the deputy, Wallace gave a false name and birth date. After a brief moment, the deputy recognized Wallace from prior contacts and recalled he had an outstanding arrest warrant. The deputy also noticed an apparent marijuana pipe in an open backpack being held by Wallace. When confronted, Wallace admitting to lying about his identity and acknowledged the warrant. 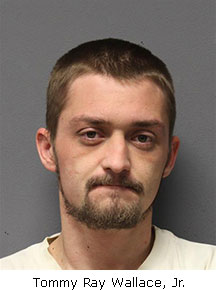 After Wallace and the other 2 males were detained, a search of the backpack revealed illicit pills, several grams of methamphetamine, marijuana wax and a scale. The deputy also found another package of meth and a meth pipe underneath Wallace’s seat. A total of nearly 10 grams of meth was seized.

Wallace was arrested and booked at the Camp Verde Detention on charges including Possession of Dangerous Drugs, Possession of a Narcotic Drug, Possession of Drug Paraphernalia and a Probation Violation Warrant. He remains in-custody on a total bond of $30,000.

The other 2 males were cleared from direct connection to the contraband. One of the males, 17-years-of-age, was transported home by deputies due a curfew violation.