A performance poet since 2006, Kluckman is a two-time member of the Albuquerque, N.M., national poetry slam team, a Pushcart Prize nominee, and recipient of the Red Mountain Press National Poetry Prize. 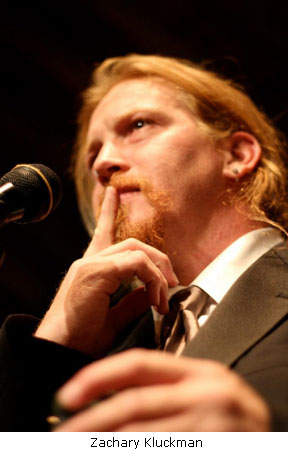 When he is not amusing himself trying to untangle string cheese, Kluckman publishes poetry in anthologies and publications like the New York Quarterly, Cutthroat and Red Fez. Featured on more than 500 radio stations, with appearances on many of the nationâ€™s most notorious stages, he is an accomplished spoken word artist, as well as the Spoken Word Editor for the Pedestal. An activist, youth advocate and organizer, he has been recognized twice for making world history as the creator of the world’s only Slam Poet Laureate Program and an organizer for the 100 Thousand Poets for Change program, the largest poetry reading in history.

As a youth advocate, Kluckman donates hundreds of hours a year to working with and empowering the youth. His first full-length collection, “Animals in Our Flesh,” has received warm reviews from Jimmy Santiago Baca among others and his second collection, “Some of it is Muscle” has just been released by Swimming with Elephants Publications.

Founded in Chicago in 1984 by construction worker Marc Smith, poetry slam is a competitive artistic sport. Poetry slams are judged by five randomly chosen members of the audience who assign numerical value to individual poets’ contents and performances. Poetry slam has become an international artistic sport, with more than 100 major poetry slams in the United States, Canada, Australia and Western Europe.