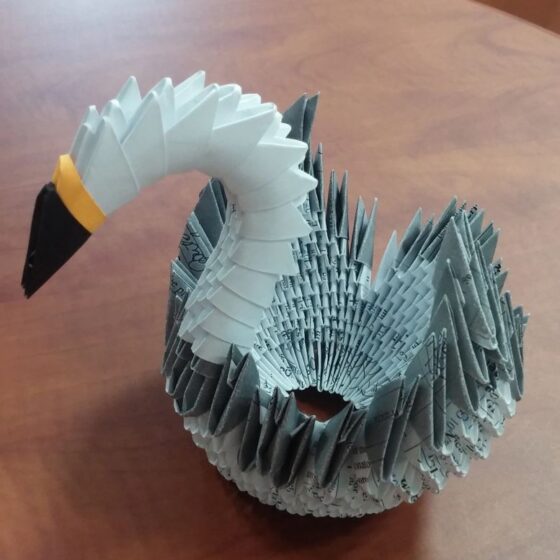 Energetically, I had mastered the trick of folding my body in upon itself. It happens at the energetic level even if it doesn’t manifest in the physical appearance. I folded myself up, tipping the crown chakra energy down towards my little Buddha belly and wrapping my shoulders inward to fill in the gaps. It seems to be the default mechanism of the sense of separation, a protective attitude that becomes automatically embedded. After a moment, or longer, abiding as awareness, abiding as not-twoness, I could feel the wide-open, infinitely empty piece of paper, the infinite potential I am, begin to fold in upon itself.

It feels more comfortable than wide-open expansiveness. It doesn’t make any sense at all, but that is how I experienced it. The known, however uncomfortable it is, seems more comfortable, less of a threat to the body, so when threatened with infinite eternality, it quite naturally begins its return to stasis, to its default lifelessness.

It is an entrenched movement.

A habit, not wrong or right, it is simply the way I was programmed to care for my tender heart. Habits, body habits, don’t generally disappear in the wink of an eye in my world. They tend to hang around a bit, even once the habit is no longer needed or required.

Waking up, noticing that what I truly am is awareness – and. its. entire. contents. — doesn’t immediately call a cease fire to the infolding, or at least it didn’t for me. The energetic system continues as it has been entrained, but as innocent awareness, not caught up in the story, not one-pointedly focused on my mind’s weavings, I have the capacity to see, to notice the small shifts, which in the past, added up and created God in one woman’s image: the origami swan.

Being open and capable of noticing and feeling the pull, watching the protective folds infolding, the discomfort is noticeable, so much so that it is difficult to stay with. This infolding happens all the time, unnoticed. As the infolding completes its arc, making something of no thing, a glorious swan enshrouded in a crystallized spell, it made me wonder why humans would ever do that to themselves.

Sadly, the answer is quite simple. Locking ourselves down, going through the energetic contortions to close off our hearts, feels better than feeling what we are desperate to avoid. It is a trade-off, not a good one, not conscious, but a trade-off nonetheless.

When mommy gave me that look, the one that said I was not good, that I was set apart from love, my little heart broke. My beautiful heart felt so exposed, so tender and raw, that I feared letting anyone in, letting anyone come too close, so I infolded. I energetically tucked myself in a dark room, in its farthest corner, and crimped myself tight into the fetal position. I went back to the womb, the closest I could get to home in a human body.

We all do it. The path of protection is well-worn from that moment on.

We do it so many times that we forget how painful infolding feels, until it is simply natural. Overtime it becomes how we think life is – painful and filled with suffering. Infolding could have been utterly gruesome – as it was; as it is – and we would still have done it. It wasn’t conscious. It was a survival instinct.

And at the time it first occurred – and many times after – we needed it to survive.

The habitual is so normalized that we quit noticing it. Even when we are free mentally, when we have seen through the ruse, the body still has a lot of coils wound round the wheel, a lot invested in the swan that echoes out as the inevitable unfolding expression.

This amazing designless design we are, is incredibly divine. The unwinding happens naturally, just like seeing through the lie of separation, just like everything known or knowable. The inner displays as the outer, so as the inner shifts the outer shifts as well. The manifestation pipeline empties and refills with its perfect mirror images, with its couldn’t-be-otherwise reflections of grandeur, be it echoes of the swan with elegantly tucked pleats or the empty page, love embodied.

The beauty of this part of the ever-changing journey is that the one who cares, who doesn’t have patience, who minds the discomfort, has been seen for what she is — a mental construct, a useful tool to explore all life offers, the out-picturing of the inner landscape and so it feels very different.