New Orleans Style Jazz Band “Andy Frasco and the U.N.” returns on Tour at the Marketplace

Sedona AZ (November 8, 2011) – Andy Frasco, a twenty-three blues/jazz musician hailing from the San Fernando Valley in Southern California, is nothing short of an enigma. Influenced by Damien Rice, Sam Cooke, Professor Longhair, Van Morrison and Tom Waits, Frasco’s style is as uninhibited as those artists who inspire him. Let’s call it Party Blues.

The band performed last spring at the Marketplace Café in the Village of Oak Creek. They were so well received from the audience and fell in love with the red rocks that the group decided to do another Northern Arizona tour. The Andy Frasco and the U.N. Band will be performing at the  Cliff Castle Casino Friday and Saturday Night and Sunday Evening from 6-9pm at the Marketplace Café. 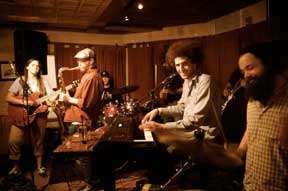 Frasco’s a rarity in the music business: one who is an industry “insider” and a talented musician. This unparalleled insight is due, in part, to his days of managing and promoting bands when he was 16 years old. He’s booked bands like HelloGoodbye, and worked with labels and venues such as Drive Thru, Atlantic Records and The Key Club in Hollywood, Ca.

What’s more, Frasco does not come from a musical background. His family played no instruments, and it wasn’t until the age of 17 that Frasco met his soul mate: the piano. At 19 years old, Frasco traveled to New York to work with friend and colleague Jordan Stilwell, producing his first album Growth and Progress. From there, Frasco toured the country with VH1’s Save the Music Foundation, raising money for Music Education in the Public Schools.

Yet 220 shows in 360 days through 33 states that he personally booked on the Save the Music Tour wasn’t enough for this young prodigy. Frasco headed back to Los Angeles to form his own band and produce his third and current album, Love, You’re Just Too Expensive. Frasco continues to prove that he is a dynamic force with which to be reckoned, as listeners marvel at his talent and soulful performances wherever he goes.

In 2011 alone, Frasco received musician of the year at showcases such as Sundance Film Festival, Hatch Fest, Orion’s Music Festival and the European Independent Film Festival. Frasco may just be the “Second Coming” of blues music for this emerging generation, changing the course of mainstream music in a blazing path of glory that will someday take him home.

The Marketplace Café will be featuring Cajun Specials to coincide with the music. There will be room for dancing and patio dining with red rock views. Event will start at 6pm. For more information call 928-284-5478.