Sedona AZ (December 3, 2016) – The National Theatre of London celebrates encore series with the limited engagement return of the sensational “War Horse” on Sunday, Dec. 11. The Sedona International Film Festival hosts the big screen encore of the theatrical triumph at its Mary D. Fisher Theatre. There will be two shows at 4 and 7 p.m.

Since its first performance at the National Theatre in 2007, “War Horse” has become an international smash hit, capturing the imagination of four million people around the world. The production won five Tony Awards when it moved to Broadway.

Based on the novel by Michael Morpurgo, “War Horse” is the powerful story of a young boy called Albert and his beloved horse, Joey, who has been requisitioned to fight for the British in World War I. Caught in enemy crossfire, Joey ends up serving on both sides during the war before landing in No Man’s Land, while Albert, not old enough to enlist, embarks on a treacherous mission to find his horse and bring him home.  “War Horse” is a remarkable tale of courage, loyalty and friendship. 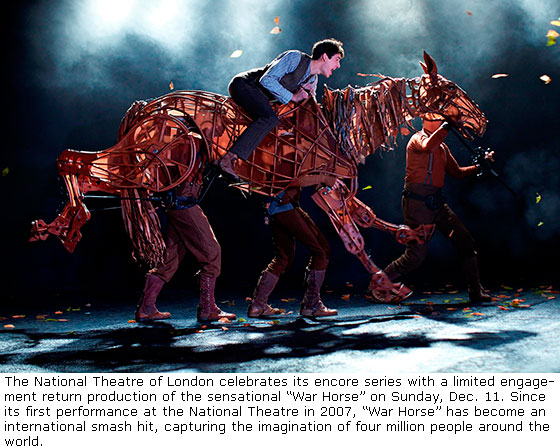 Adapted for the stage by Nick Stafford, “War Horse” takes audiences on an extraordinary journey from the fields of rural Devon to the trenches of First World War France. Filled with stirring music and songs, this powerfully moving and imaginative drama is a show of phenomenal inventiveness. At its heart are astonishing life-size puppets by South Africa’s Handspring Puppet Company, who bring breathing, galloping, charging horses to thrilling life on stage.

Don’t miss your chance to experience this landmark production.

“War Horse” has garnered top, five-star reviews from every major publication around the world:

“The theatre event of the decade.”  — Sunday Times

“Genius isn’t too strong a word to describe this astonishing production.” — Daily Telegraph

“A triumph of theatricality.”– The Observer

“War Horse” will be shown at the Mary D. Fisher Theatre on Sunday, Dec. 11 at 4:00 and 7:00 p.m. Tickets are $15, or $12.50 for Film Festival members. Tickets are available in advance at the Sedona International Film Festival office or by calling 928-282-1177. Both the theatre and film festival office are located at 2030 W. Hwy. 89A, in West Sedona. For more information, visit: www.SedonaFilmFestival.org.