Sedona AZ (May 11, 2017) – The National Theatre of London continues its season with its acclaimed production of “Obsession”, showing in Sedona on Saturday, May 20 at 4 p.m. The Sedona International Film Festival hosts the big screen premiere at its Mary D. Fisher Theatre.

Gino is a drifter, down-at-heel and magnetically handsome. At a road side restaurant he encounters husband and wife, Giuseppe and Giovanna. Irresistibly attracted to each other, Gino and Giovanna begin a fiery affair and plot to murder her husband. But, in this chilling tale of passion and destruction, the crime only serves to tear them apart. 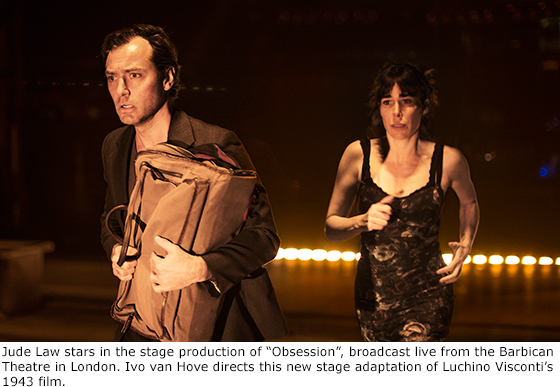 “Obsession” is a psychological tale examining the relationship of a couple, the power of seduction and how far they will go to be with each other.

The staging is beautiful and visually stunning. The design includes huge video projections which provide a filmic atmosphere.

“Obsession” will be shown at the Mary D. Fisher Theatre on Saturday, May 20 at 4:00 p.m. Tickets are $15, or $12.50 for Film Festival members. Tickets are available in advance at the Sedona International Film Festival office or by calling 928-282-1177 or online at www.SedonaFilmFestival.org. Both the theatre and film festival office are located at 2030 W. Hwy. 89A, in West Sedona.