One summer’s evening, two ageing writers, Hirst and Spooner, meet in a Hampstead pub and continue their drinking into the night at Hirst’s stately house nearby.  As the pair become increasingly inebriated, and their stories increasingly unbelievable, the lively conversation soon turns into a revealing power game, further complicated by the return home of two sinister younger men. 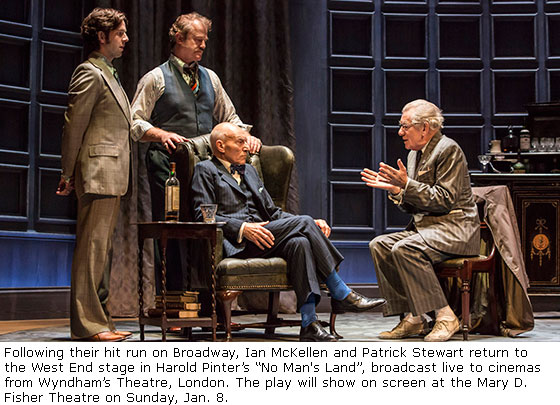 Also starring Owen Teale and Damien Molony, don’t miss this glorious revival of Pinter’s comic classic. The broadcast will be followed by an exclusive Q&A with the cast and director Sean Mathias.

Critics are raving about “No Man’s Land”, and it has garnered 4- and 5-star reviews from every major publication in London:

“A faithful and loving production of this masterwork.” — Guardian

“No Man’s Land” will be shown at the Mary D. Fisher Theatre on Sunday, Jan. 8 at 3:00 p.m. Tickets are $15, or $12.50 for Film Festival members. Tickets are available in advance at the Sedona International Film Festival office or by calling 928-282-1177 or online at www.SedonaFilmFestival.org. Both the theatre and film festival office are located at 2030 W. Hwy. 89A, in West Sedona.