Sedona AZ (March 27, 2017) – The National Theatre of London continues its season with its acclaimed production of “Hedda Gabler” showing in Sedona on Sunday, April 2 at 3 p.m. The Sedona International Film Festival hosts the big screen premiere at its Mary D. Fisher Theatre.

Hedda and Tesman have just returned from their honeymoon and the relationship is already in trouble. Trapped but determined, Hedda tries to control those around her, only to see her own world unravel.

Tony Award-winning director Ivo van Hove (A View from the Bridge at the Young Vic Theatre) returns to National Theatre Live screens with a modern production of Ibsen’s masterpiece. 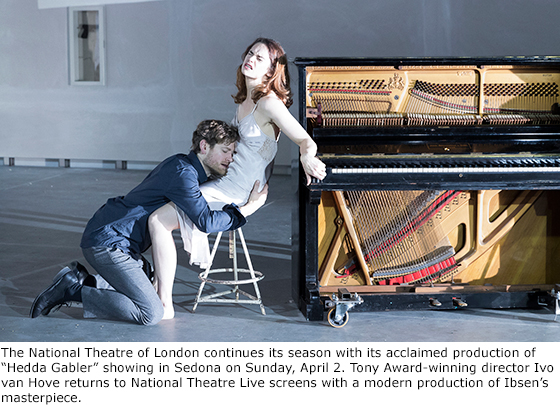 Ruth Wilson (Golden Globe winner for “The Affaire”) plays the title role in a new version by Patrick Marber (Notes on a Scandal, Closer).

“Hedda Gabler” is sold out at the National Theatre in London. This production on screen is the only way to see this masterpiece. This new version is a slick, stylish modern production of the classic Ibsen play.

“One of the performances and productions of the year.” — Daily Telegraph

“Ruth Wilson is phenomenal.” — Time Out

“Dark, bold and devastating. A triumph.” — Mail on Sunday

“Hedda Gabler” will be shown at the Mary D. Fisher Theatre on Sunday, April 2 at 3:00 p.m. Tickets are $15, or $12.50 for Film Festival members. Tickets are available in advance at the Sedona International Film Festival office or by calling 928-282-1177 or online at www.SedonaFilmFestival.org. Both the theatre and film festival office are located at 2030 W. Hwy. 89A, in West Sedona.