Sedona AZ (March 7, 2016) – The National Theatre of London continues its season with “As You Like It” showing in Sedona on Sunday, March 20 at 3 p.m. The Sedona International Film Festival hosts the big screen premiere at its Mary D. Fisher Theatre.

Shakespeare’s glorious comedy of love and change comes to the National Theatre for the first time in over 30 years, with Rosalie Craig as Rosalind.

With her father the Duke banished and in exile, Rosalind and her cousin Celia leave their lives in the court behind them and journey into the Forest of Arden.

There, released from convention, Rosalind experiences the liberating rush of transformation. 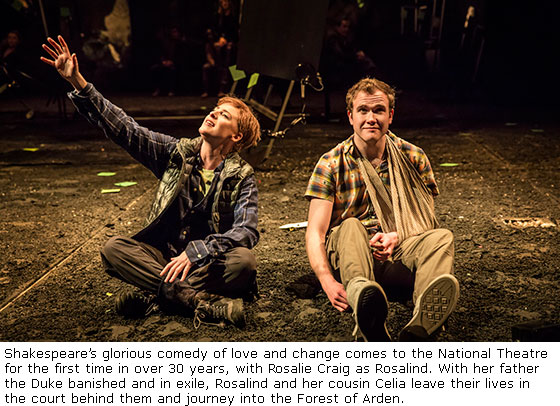 Disguising herself as a boy, she embraces a different way of living and falls spectacularly in love.

“As You Like It” features a big ensemble cast of National Theatre Live performers, including Rosalie Craig (London Road) as Rosalind and Patsy Ferran (Treasure Island) as Celia. This high-quality, feel-good Shakespeare comedy boasts a stunning set with a spectacular scene change into the Forest of Arden.

Critics are raving about “As You Like It”, and it has garnered 4- and 5-star reviews from every major publication in London:

“Brilliantly natural, fresh and bang up to date. Stunning!” — Time Out

“As You Like It” will be shown at the Mary D. Fisher Theatre on Sunday, March 20 at 3:00 p.m. Tickets are $15, or $12.50 for Film Festival members. Tickets are available in advance at the Sedona International Film Festival office or by calling 928-282-1177 or online at www.SedonaFilmFestival.org. Both the theatre and film festival office are located at 2030 W. Hwy. 89A, in West Sedona.