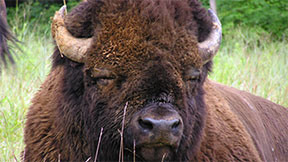 The Arizona Game and Fish Commission believes licensed citizen hunters should be considered as a significant part of a comprehensive solution to reduce and manage the bison herd. Allowing volunteer sportsmen and women to assist in managing the bison population would take the financial burden off the taxpayer and is the most economically and logistically effective option. How to provide comment The preferred method for submitting comments is through the NPS Planning, Environment and Public Comment website. You may also mail or hand-deliver your comments to the Superintendent, Grand Canyon National Park, PO Box 129, Grand Canyon, AZ 86023. Comments will be accepted through March 26, 2016. Additional information can be found at http://parkplanning.nps.gov/grca_bison.   Background The bison herd occupying Grand Canyon’s North Rim lands and adjacent land is estimated at between 400 and 600 animals. The population must be reduced to minimize impacts to natural and cultural resources within the park. In 2014, in accordance with the National Environmental Policy Act (NEPA), the NPS initiated public scoping for an Environmental Impact Statement (EIS) to develop a long-term, coordinated approach to manage the current and future effects of bison on the park’s natural and cultural resources.  As a result of the change in scope to initial herd reduction, the NPS now proposes to complete an Environmental Assessment instead of an EIS. Cooperators on the project include NPS, U.S. Forest Service Bureau of Land Management, Arizona Game and Fish Department, and Intertribal Buffalo Council.