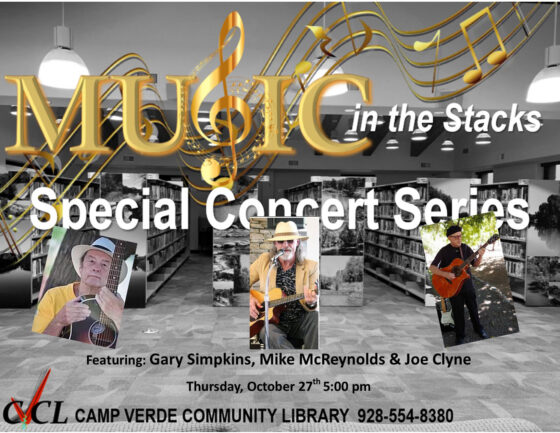 Born into family of musicians, Mike McReynolds has been playing guitar since the fifth grade and has played professionally ever since as a single, in duos, trios, and in full bands. He’s a sing-songwriter who enjoys writing in all genres of music from blues, and folk to rock. Through the years he has developed his own style and has performed in many of the major singer/songwriter festivals nationally and internationally.

Guitarist Joe Clyne was a big part of the Kansas  City music scene for years. He plays pop, Motown, Blues, Country, and originals. He has a tremendous amount of recording experience and was the opening act for the Righteous Brothers, Waylon Jennings, Kansas, and Eric Burden and War. He recently moved to the Verde Valley and is ready to share his music with everyone.

About Camp Verde Community Library
At Camp Verde Community Library, we connect people of all ages and walks of life to the expanding world of information, ideas, and creative experiences through free and equitable access to library resources. The physical library is located just off Montezuma Castle Highway at 130 Black Bridge Road, Camp Verde AZ. Find the library online at www.campverde.az.gov/cvcl. For more information about this or any other library program give us a call at 554-8380