Sedona AZ (February 21, 2017) – The Sedona International Film Festival is proud to present the next Met Live Opera presentation of Antonín Dvorák’s “Rusalka” on Saturday, March 4. There will be two shows that day at the Mary D. Fisher Theatre: 11 a.m. and 4 p.m.

Plan to come early as Ed Ingraham will lead a pre-opera talk one hour before each production (10 a.m. for the morning show and 3 p.m. for the encore). 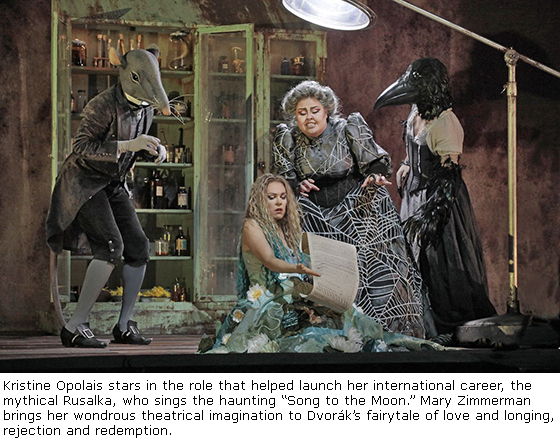 The only one of Dvorák’s operas to gain an international following (so far), Rusalka is in many ways a definitive example of late Romanticism—containing folklore, evocations of the natural and the supernatural worlds, and even a poignant interpretation of the idea of a love-death. The story has a strong national flavor as well as universal appeal, infused by the Romantic supernaturalism of Friedrich de la Motte Fouqué’s novella Undine (previously set as an opera by E.T.A. Hoffmann, Tchaikovsky, and others) and Hans Christian Andersen’s The Little Mermaid.

The water nymph Rusalka has fallen in love with a human—the Prince—when he came to swim in her lake. Now she wants to become human herself and live on land to be with him. Rusalka’s father, the Water Sprite, is horrified and tells her that humans are evil and full of sin. When Rusalka insists, claiming they are full of love, he says she will have to get help from the witch Ježibaba. Rusalka calls on the moon to tell the Prince of her love. Ježibaba arrives and agrees to turn Rusalka into a human—but warns her that if she doesn’t find love she will be damned and the man she loves will die. Also, by becoming mortal, she will lose her power of speech. Convinced that her feelings for the Prince can overcome all spells, Rusalka agrees and Ježibaba gives her a potion to drink. As dawn breaks, the Prince appears with a hunting party and finds Rusalka by the lake. Even though she won’t speak to him, he is captivated by her beauty and leads her away to his castle. From the lake, the voices of the Water Sprite and the other water nymphs are heard, mourning the loss of Rusalka.

At the Prince’s castle, the Gamekeeper and the Kitchen Boy talk about the approaching wedding of the Prince and his strange new bride, whose name nobody knows. The Prince enters with Rusalka. He wonders why she is so cold toward him but remains determined to win her. A Foreign Princess, who has come for the wedding, mocks Rusalka’s silence and reproaches the Prince for ignoring his guests. The Prince sends Rusalka away to dress for the ball and escorts the Princess into the castle for the beginning of the festivities.

In the deserted garden, the Water Sprite appears from the pool. Rusalka, who has become more and more intimidated by her surroundings, rushes from the castle in tears. Suddenly recovering her voice, she begs her father to help her, telling him that the Prince no longer loves her. The Prince and the Princess come into the garden, and the Prince confesses his love for her. When Rusalka intervenes, rushing into his arms, he rejects her. The Water Sprite warns the Prince of the fate that awaits him, then disappears into the pool with Rusalka. The Prince asks the Princess for help but she ridicules him and tells him to follow his bride into hell.

Rusalka waits by the lake once again, lamenting her fate. Ježibaba appears and mocks her, then hands her a knife and explains that there is a way to save herself: she must kill the Prince. Rusalka refuses, throwing the weapon into the water. When her sisters reject her as well, she sinks into the lake in despair. The Gamekeeper and the Kitchen Boy arrive to ask Ježibaba for help. The Prince, they say, has been bewitched by a strange wood girl he was going to marry. Enraged, the Water Sprite rises from the lake, saying that it was the Prince who deceived Rusalka. Terrified by the supernatural sight, the two run away. The wood nymphs enter, singing and dancing, but when the Water Gnome explains to them what has happened to Rusalka, they fall silent and disappear.

The Prince, desperate and half crazy with remorse, emerges from the forest, looking for Rusalka and calling out for her to return to him. She appears from the water, reproaching him for his infidelity, and explains that now a kiss from her would kill him. Accepting his destiny, he asks her to kiss him to give him peace. She does, and he dies in her arms. Rusalka asks for mercy on his soul and disappears into the water.

The Met Live Opera’s “Rusalka” will be shown at the Mary D. Fisher Theatre on Saturday, March 4 at 11 a.m. and 4 p.m. The pre-opera talks will take place one hour before each show. Tickets are $20 general admission, $18 for Film Festival members, and $15 for students. Tickets are available in advance at the Sedona International Film Festival office or by calling 928-282-1177. Both the theatre and film festival office are located at 2030 W. Hwy. 89A, in West Sedona. For more information, visit: www.SedonaFilmFestival.org.