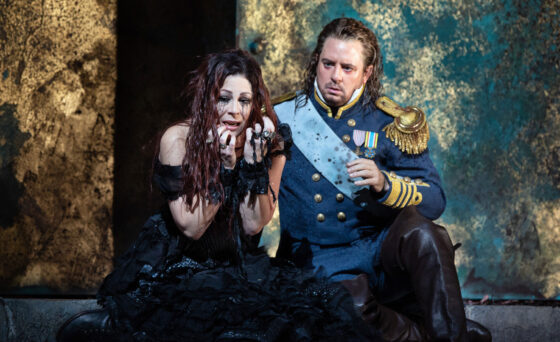 Having triumphed at the Met in some of the repertory’s fiercest soprano roles, Sondra Radvanovsky stars as the mythic sorceress who will stop at nothing in her quest for vengeance, kicking off the highly anticipated 2022–23 Live in HD season.
Share
Facebook Twitter LinkedIn Pinterest Email Reddit WhatsApp

Sedona News – The Mary D. Fisher Theatre is honored to continue to be the home for the Met Live Opera programs for the 2022-2023 season, presented by the Sedona International Film Festival. The season will officially kick off with Luigi Cherubini’s “Medea” live via simulcast on Saturday, Oct. 22 at 10 a.m. and the encore presentation on Wednesday, Oct. 26 at 3 p.m.

Plan to come early as Russell Fox will lead a pre-opera talk one hour before the LIVE production on Saturday.

Having triumphed at the Met in some of the repertory’s fiercest soprano roles, Sondra Radvanovsky stars as the mythic sorceress who will stop at nothing in her quest for vengeance, kicking off the highly anticipated 2022–23 Live in HD season. Joining Radvanovsky in the Met-premiere production of Cherubini’s rarely performed masterpiece is tenor Matthew Polenzani as Medea’s Argonaut husband, Giasone; soprano Janai Brugger as her rival for his love, Glauce; bass Michele Pertusi as Medea’s father, Creonte, the King of Corinth; and mezzo-soprano Ekaterina Gubanova as Medea’s confidante, Neris.

The Met Live Opera’s “Medea” will be shown at the Mary D. Fisher Theatre on Saturday, Oct. 22 at 10 a.m. (live simulcast) with an encore on Wednesday, Oct. 26 at 3 p.m.. The pre-opera talks will take place one hour before the live Saturday simulcast. Tickets are $25 general admission, $22 for Film Festival members, and $15 for students. Season tickets for the entire 15th Anniversary season of the Met Live Operas are also available. Tickets are available in advance at the Sedona International Film Festival office or by calling 928-282-1177. Both the theatre and film festival office are located at 2030 W. Hwy. 89A, in West Sedona. For more information, visit: www.SedonaFilmFestival.org.