Sedona AZ (January 18, 2016) – The Sedona International Film Festival is proud to present the next Met Live Opera presentation of Giacomo Puccini’s “Turandot” on Saturday, Jan. 30. There will be two shows that day at the Mary D. Fisher Theatre: 11 a.m. (live simulcast) and 4 p.m. (encore). There will be a pre-opera talk led by Ginny and Russ Fox one hour before each of these performances. 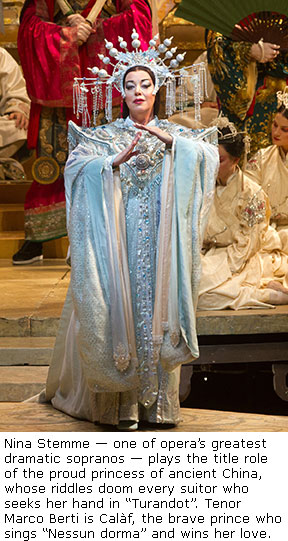 Puccini’s final opera is an epic fairy tale set in a China of legend, loosely based on a play by 18th-century Italian dramatist Carlo Gozzi. Featuring a most unusual score with an astounding and innovative use of chorus and orchestra, it is still recognizably Puccini, bursting with instantly appealing melody. The unenviable task of completing the opera’s final scene upon Puccini’s sudden death was left to the composer Franco Alfano. Conductor Arturo Toscanini oversaw Alfano’s contribution and led the world premiere.

Outside the Imperial Palace in Peking, a mandarin reads an edict to the crowd: any prince seeking to marry the princess Turandot must answer three riddles. If he fails, he will die. The most recent suitor, the Prince of Persia, is to be executed at the moon’s rising. Among the onlookers are the slave girl Liù, her aged master, and the young Calàf, who recognizes the old man as his long lost father, Timur, vanquished King of Tartary. When Timur reveals that only Liù has remained faithful to him, Calàf asks why. She replies that once, long ago, Calàf smiled at her. The mob cries for blood but greets the rising moon with a sudden fearful silence. When the Prince of Persia is led to his execution, the crowd calls upon the princess to spare him. Turandot appears, and with a contemptuous gesture orders that the execution proceed. As the victim’s death cry is heard from the distance, Calàf, transfixed by the beauty of the unattainable princess, strides to the gong that announces a new suitor. Suddenly Turandot’s three ministers, Ping, Pang, and Pong, appear to discourage him. Timur and the tearful Liù also beg him not to risk his life (“Signore, ascolta!”). Calàf tries to comfort her (“Non piangere, Liù”) but then strikes the gong and calls Turandot’s name.

Inside the palace, Ping, Pang, and Pong lament Turandot’s bloody reign, praying that love will conquer her heart and restore peace. The three let their thoughts wander to their peaceful country homes (Trio: “Ho una casa nell’Honan”), but the noise of the people gathering to hear Turandot question the new challenger calls them back to reality. The old emperor asks Calàf to reconsider, but he will not be dissuaded. Turandot enters and describes how her beautiful ancestor, Princess Lou-Ling, was abducted and killed by a conquering prince. In revenge, she has turned against men and determined that none shall ever possess her (“In questa reggia”). Facing Calàf, she poses her first question: What is born each night and dies each dawn? “Hope,” Calàf answers, correctly. Turandot continues: What flickers red and warm like a flame, yet is not a flame? “Blood,” Calàf replies after a moment’s thought. Shaken, Turandot delivers the third riddle: What is like ice but burns? Tense silence prevails until Calàf triumphantly cries, “Turandot!” The crowd erupts in joy, and the princess vainly begs her father not to give her to the stranger. Hoping to win her love, Calàf offers Turandot a challenge of his own: if she can learn his name by dawn, he will forfeit his life.

In the Imperial Gardens, Calàf hears a proclamation: on pain of death no one in Peking shall sleep until Turandot learns the stranger’s name. Calàf is certain of his victory (“Nessun dorma!”), but Ping, Pang, and Pong try to bribe him to leave the city. As the fearful mob threatens him to learn his name, soldiers drag in Liù and Timur. Calàf tries to convince the crowd that neither of them knows his secret. When Turandot appears, commanding Timur to speak, Liù replies that she alone knows the stranger’s identity and will never reveal it. She is tortured but remains silent. Impressed by such fortitude, Turandot asks Liù’s secret. It is love, she replies. When the soldiers intensify the torture, Liù tells Turandot that she, too, will know the joys of love (“Tu, che di gel sei cinta”). Then she snatches a dagger and kills herself. The crowd forms a funeral procession and the body is taken away. Turandot remains alone to confront Calàf, who impetuously kisses her (Duet: “Principessa di morte!”). Knowing emotion for the first time, Turandot weeps (“Del primo pianto”). Calàf, now sure of winning her, reveals his identity. Once again before the emperor’s throne, Turandot declares she knows the stranger’s name: it is Love.

The Met Live Opera’s “Turandot” will be shown at the Mary D. Fisher Theatre on Saturday, Jan. 30 at 11 a.m. (live simulcast) and 4 p.m. (encore). The pre-opera talk will take place one hour before each show.