MATFORCE Receives ‘Coalition of the Year’ Award
in Washington, D.C.

Verde Valley AZ (February 19, 2014) – MATFORCE received top national honors as ‘Coalition of the Year’ from the Community Anti-Drug Coalitions of America (CADCA).   MATFORCE received its award before an audience of more than 2,500 substance abuse prevention and treatment specialists from throughout the country in Washington, D.C. on February 6, 2014 at the CADCA 24th annual National Leadership Forum.  MATFORCE was selected for their success in reducing youth prescription drug abuse and underage drinking.

MATFORCE Co-Chair and Yavapai County Attorney, Sheila Polk, said, “I am very proud of MATFORCE’s many accomplishments since its beginning in 2006.   With just a small staff, MATFORCE has successfully united our community leaders, educators, youth, parents, agencies and many hundreds of volunteers to increase prevention strategies and reduce substance abuse. Our many drug abuse prevention projects are truly building a healthier community.” 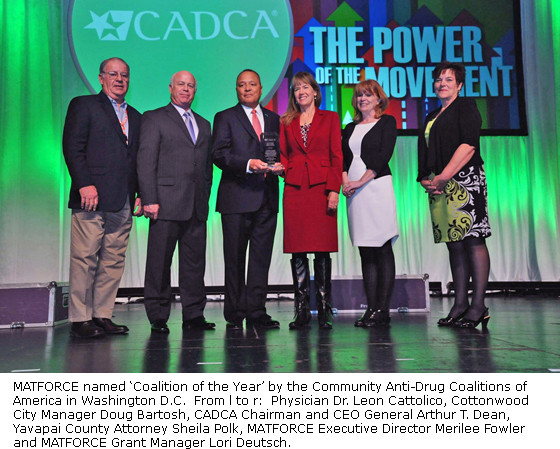 MATFORCE approached the reduction of prescription drug abuse by employing a variety of projects, including:  reaching out to doctors and pharmacists, educational presentations in schools and in the community, a media campaign, safe disposal practices at Dump the Drugs events and by using prescription drug drop boxes, plus youth poster and video contests.

The result has been a decline in prescription drug abuse among youth. The Arizona Youth Survey (AYS) show a 28% decline in 30-day use between 2008 to 2012.

MATFORCE also has many projects directed at preventing underage drinking, which helped lead to a 22% decline in 30-day alcohol use between 2006 and 2012 according to the AYS.

Polk concluded, “Everyone involved with MATFORCE is honored with this award.  But we can feel even more honored because we have helped save many young lives.  I am grateful for the efforts of so many community members working together to solve a problem.”

For more information on MATFORCE and its many prevention projects visit matforce.org.