Letter to The Editor

Letter to The Editor: Tapped Out — Cottonwood’s Growth Bubble is a Ticking Time Bomb

How will the City find money to pay for all of the repairs and maintenance costs for its toxic brick and mortar assets and staggering six-figure employees’ compensation packages? The city is tapped out!

There are many ways to create economic suicide on a local and national level. Cottonwood is doing it by building a slew of toxic assets using taxpayers’ credit–none of the city’s money– and now the city’s available credit lines are tapped out. So now the city’s growth bubble IS A TICKING TIME BOMB.

When times were good, this was the city that borrowed more rashly on taxpayers’ and water ratepayers’ credit, built more lavishly, and invested more foolishly in non-productive, toxic assets than any other — to “LOOK GOOD”– for vanity. When the bubble bursts, Cottonwood will fall hard. The entire economy is built on unproductive, non-self-sustaining bricks and mortar. For example, the Cottonwood Recreation Center, which is possibly the biggest toxic asset–is subsidized by the city in the amount of an estimated $2.5 mil. a year in capital. According to the city’s FY 2018 budget, the Rec Center is estimated to produce only $650,000 in membership fees ending June 30, 2018. The Regional 911 Communications Center doesn’t break even, and the city’s transit system is another asset subsidized by the city, and the transfer station is also a huge cash flow drain. These are only a FEW of the city’s toxic assets which are not self-sustaining.

The City already tapped out (over-leveraged) all of its sources of income/credit to repay/guarantee bond debt repayments and balance the budget. Did you know the city dangerously put three liens on the city’s sales tax income–which is precarious because the city does not have a property tax??? WHY IS THIS CRITICALLY IMPORTANT??? The city is solely dependent on the tourism industry which is sensitive to downturns in the economy. 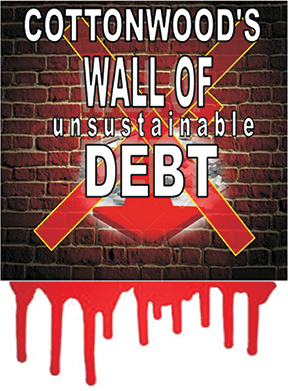 In order for Cottonwood’s massive infrastructure development to financially work, the amount of revenue generated by the NEW GROWTH must ultimately cover the expenses incurred for maintaining the new infrastructure. The problem is: Cottonwood’s infrastructure CANNOT SUSTAIN ITSELF. If the city cannot raise enough revenue to repair and replace their aging infrastructure, pay debts and pension liabilities–basically, it’s a time bomb waiting to explode. The problem is Cottonwood has had 12 years of unproductive growth — growth that does not financially support itself; it hhas only buried taxpayers and water ratepayers in millions of dollars of financial liabilities.

All of the city’s debts were never approved by a majority of the voters, except for the construction loan for the Rec Center. The city issued non-voter approved debt mechanisms to avoid holding elections-to circumvent public opposition and the city paid NOTHING for its new growth.

The City leaders’ flawed assumptions are now coming back to bite to haunt city bill payers in a cruel way. Like any bubble, there’s only one way this can end. The taxpayers and ratepayers will be stuck with the staggering debt payments for 30 years and will be left holding the bag long after city leaders’ are gone!!! Developing ‘places’ or ‘things’ that are nonproductive only creates impoverishment. The city of Cottonwood already charges 3% rent tax and 3% grocery/food tax which is repressive to the poor.

THE PROBLEM IS: The city’s developments NEVER CREATED REAL WEALTH — THEY ONLY CREATED THE ILLUSION OF WEALTH. Now the city is no longer able to borrow more money to mask over its debts–because the city has exhausted the recurring streams of revenue required to secure credit lines. Since 2004, the city incurred a staggering, $100 million in total long term debts (including bonds, capital leases and $24.3 million in unfunded pension debt), and now there is NO MONEY to repair and maintain the city’s high cost of maintenance. This is why THE CITY’S GROWTH BUBBLE IS UNSUSTAINABLE, AND IT IS A TICKING TIME BOMB.

For example, the Mingus Wastewater Plant is most at risk of going down without millions of dollars in urgent repairs but the city wiped out its $13 million in wastewater cash reserves to build the boondoggle Riverfront Satellite Sewer project. Even worse, water and wastewater ratepayers–who are already paying some of the highest water rates in America–cannot be pushed to pay more rate increases before Cottonwood–the parasitic capitalistic city kills its hosts–the bill payers!!!!!! The worst example is the Riverfront Satellite Water Reclamation Plant on the Verde River with a lavish learning center and two million dollars in solar panels and high end technology in a 100 and 500 year flood plain, which is now under construction. Construction cost overruns skyrocketed from its original $8 million budget and is racing toward $17 million once the city’s purple piping distribution system to discharge the treated affluent and injection wells at the Verde Valley Fairgrounds Kids’ Park are completed. Due to engineering and planning mistakes the city’s first two methods to discharge the treated affluent failed.

TICK. TICK. TICK. The city has sucked every dime they could get out of the public and now it has no money left to finish construction on the OUT-OF-CONTROL Riverfront Satellite Water [Wastewater] Reclamation Plant. And what about the $19.5 MILLION the city is paying to 203 full time employee equivalents in FY2018 in total compensation (salaries, benefits, perks, Social Security, pensions, workers comp, etc.)??? The employees’ inflated cost increases are in a death spiral.

Cottonwood’s situation rests in a perfect storm. Because Cottonwood will not be able to significantly increase its revenue in the near future — revenue is projected to stay relatively flat for the next three years — any realistic solution must make significant changes to present and future employee compensation, and cutting expenses to pay down debt. The latest city financial outlook offers little comfort.