‘Leonardo da Vinci: The Genius in Milan’ premieres in Art & Architecture Series May 23

Sedona AZ (May 13, 2016) – Sedona International Film Festival presents the third feature in the new “Art & Architecture in Cinema” series: “Leonardo da Vinci: The Genius in Milan”. The event will show in Sedona on Monday, May 23 at 4 and 7 p.m. at the festival’s Mary D. Fisher Theatre. This is the third in a series of seven featured programs.

The festival is proud to be the official host of the new series, joining hundreds of theatres around the globe for this special exhibition on screen. Cinema guests can now enjoy unprecedented high definition access into the lives of renowned artists, their art and the fabulous museums and galleries that are not only the custodians of such masterpieces, but works of art in their own right. 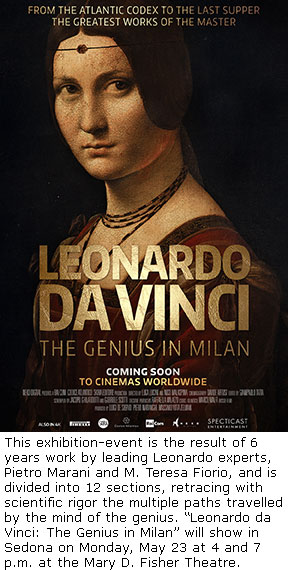 Paris, the Louvre Museum. A spring morning. Leonardo da Vinci’s famous painting “La Belle Ferronière” is removed from the wall, packed and sent by plane to Milan where, on the occasion of EXPO 2015, the most important cultural event of the year will be inaugurated: “Leonardo 1452- 1519”, one of the most decisive exhibitions ever to be held on Leonardo.

This exhibition-event is the result of 6 years work by leading Leonardo experts, Pietro Marani and M. Teresa Fiorio, and is divided into 12 sections, retracing with scientific rigor the multiple paths travelled by the mind of the genius: the foundation of drawing, the role of nature and science, comparison between the arts, reflection on the ancients, the utopian projects, anatomy and mechanics, the unity of knowledge, images of the divine, myths over the centuries (starting with the success of the Mona Lisa), and so on.

At the end of the fifteenth century, Leonardo da Vinci lived for eighteen years in Milan at the court of Ludovico Sforza, known as ‘Il Moro’. It was a long, important period in his life that left a lasting impression on the city. In spring 2015, Milan paid tribute to Leonardo by holding a large exhibition at the Palazzo Reale. Stemming from this exhibition came the film “Leonardo da Vinci: The Genius in Milan”, which uses a combination of documentary interviews and reenactments to tell the story of the renowned artist’s world and the treasures he left us.

This curated collection of acclaimed films will give audiences around the U.S. an intimate and informed experience with some of the world’s leading artists and masterpieces. This series will bring the great artistic treasures of the world to audiences who may not have direct access. With the highest quality productions and unrivaled expert narration, this is as close to a museum experience as any culture lover could hope for.

“Leonardo da Vinci: The Genius in Milan” will be shown at the Mary D. Fisher Theatre on Monday, May 23 at 4 and 7 p.m. Tickets are $15, or $12.50 for Film Festival members. Tickets are available in advance at the Sedona International Film Festival office or by calling 928-282-1177 or online at www.SedonaFilmFestival.org. Both the theatre and film festival office are located at 2030 W. Hwy. 89A, in West Sedona.