Sedona AZ (February 17, 2016) – At its annual Achievement Awards luncheon Saturday, Keep Sedona Beautiful presented l1 honors for exemplary service and environmental accomplishments through 2015.  The event at Los Abrigados was attended by 105 awardees and residents.  Emcees were the popular entertainers Tom and Shondra. 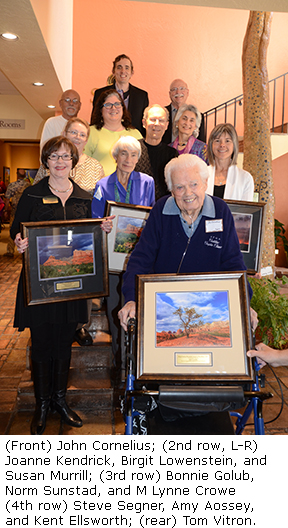 The Caregivers Coalition was recognized for its volunteers who provide programs and services to adults who need assistance in maintaining their independence and quality of life at home.

The Segners were honored for providing gardens for teaching and for residents to raise food, as well as the energy-saving rooftop green plantings at their El Portal hotel, and sponsorship of the Uptown “Walk Thru Time” historic signage project.

Mr. Sunstad received recognition for his volunteer work with the elderly, as a KSB Litter Lifter, at the Forest Service Visitor Center, and other volunteer activities.

John Cornelius was especially honored for his years of fundraising efforts to help the veterans in the Northern Arizona Health Care System — the Veterans’Administration hospital in Prescott.  To date John has raised more than $180,000 to help the veterans, and hopes to make it over $200,000 this year with help from the public..

The Yavapai Food Neighbors Project builds community support for meeting the needs of the hungry.  Its volunteers fill gaps in the emergency food supply, support local sustainable food sources, and reduce hunger.  Their green bags collect food donations from residents and make them available to Verde Valley families in need.

Page Springs Cellars was recognized for its 6600-square foot solar array which produces an average 15,000 kilowatt hours per month — about 88 percent of the winery’s overall electric needs.  This energy saving plays its part in reducing climate change.

Bell Rock Plaza removed 16 parking lot lights which generated 29,000 lumens, and replaced them with eight LED lights which reduced the total light by 85 percent, while maintaining safe lighting levels in the lot.  This reduced their electric cost and helps to preserve our treasured night skies.

The Jewish Community center was recognized for its highway sign whose beauty and simplicity fit the spectacular view of its surroundings.

Susan Murrill earned KSB’s 2015 Volunteer of the Year Award for hundreds of hours of work on varied KSB activities.

The KSB Norman McGee Award, named after KSB’s 1972 founder, was earned by Joanne Kendrick and Birgit Lowenstein for their prodigious efforts on preservation of dark skies and help in research and drafting the new US Forest Service Management Plan.  Only 26 others have been so honored since 1972.  Eileen McGee, widow of Norman McGee, was a special guest at the event.

Keep Sedona Beautiful, Inc. is a nonprofit organization that, by acting through the stewardship of its members and volunteers, is committed to protecting and sustaining the unique scenic beauty and natural environment of the Greater Sedona Area.  For more information, call (928) 282-4938, or visit www.keepsedonabeautiful.org.