Bob Huggins, program manager for the rangers, says Showalter’s contributions have been significant. “Jerry was been with us since almost the beginning of the program and has been a real leader and example for others to follow,” he says. “He will be sorely missed.” 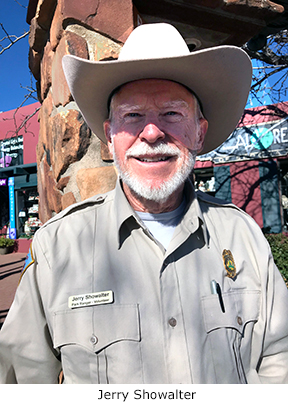 “Jerry was a pleasure to work with,” she says. “He was always smiling and willing to help at any task to make city events better for everyone involved.”

Showalter and wife Nancy moved to Sedona in 1979 and purchased Sedona Building Supply, which they ran for 14 years. After retiring they both remained active in the community, volunteering in a variety of activities. From 1991 to 2001 Showalter served the local American Youth Soccer Organization in a number of capacities including coach, referee, town commissioner, area director, and regional commissioner. He also volunteered with the Sedona Fire District’s Technical Rescue Team.

Showalter was instrumental in the incorporation of the city of Sedona, and served on the Parks and Recreation Commission and Board of Adjustment.

Among the service areas of which Showalter is most proud was his work with the Big Brothers Big Sisters of America where he was board chair for the Sedona/Verde Valley chapter and sponsored a little brother for seven years. In 2013 he was named Arizona’s Big Brother of the Year.

Showalter continues to contribute his time and skills to benefit the community including working with organizations focused on managing impacts from traffic in Oak Creek Canyon.

Showalter says with a little more free time, he plans to “play more golf and enjoy the great outdoors and all that Sedona has to offer.”