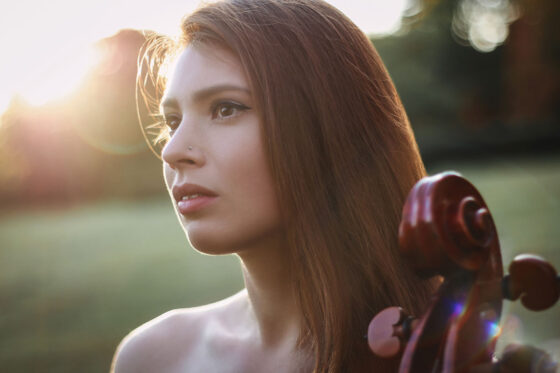 At nineteen years old, Ms. Parnas won first prize at the Young Concert Artists (YCA) International Auditions. Under the auspices of YCA, she presented recitals at such notable venues as Carnegie Hall, the Kennedy Center, and the National Museum of Women in the Arts. Additionally, she was featured as a guest artist with L’Orchestre National des Pays de la Loire in France, the Charleston Symphony Orchestra, and at YCA festivals in Beijing and Tokyo, among many others. In the season following her tenure with YCA, Ms. Parnas was featured with the Orpheus Chamber Orchestra and at numerous summer music festivals, including the Brevard Music Festival, El Paso Pro Música, Northwest Bach Festival, and Sitka Summer Music Festival, where she has twice-served as Artist-Apprentice to Grammy award-winning cellist Zuill Bailey.

Granddaughter of distinguished cellist Leslie Parnas, Ms. Parnas started playing cello at the age of four and made her concerto debut at age eleven. In 2005 at the age of 14, she became the Sinfonietta’s first “emerging artist.” Her sister Madalyn joined her then, and a few years later both sisters returned to perform the Brahms Double Concerto with the Sinfonietta.

Cicely studied with Peter Wiley and Ronald Feldman and earned an Artist Diploma from Indiana University’s Jacobs School of Music, where she worked with Sharon Robinson. Ms. Parnas performs on a 1712 Giovanni Grancino cello.

The May 8th concert begins with Mozart’s Overture to the Magic Flute, K. 620. The Magic Flute premiered on September 30, 1791, in Vienna, just two months before the composer’s premature death.

Edward Elgar wrote the Cello Concerto in E Minor, Op. 85 in 1919, during the aftermath of World War I. While the concerto was not well received at its premiere with the London Symphony Orchestra, it later became one of the popular staples of the cello concerto repertoire. Ernest Newman, a leading critic at the time, wrote: “The work itself is lovely stuff, very simple – that pregnant simplicity that has come upon Elgar’s music these last couple of years., but with profound wisdom and beauty underlying its simplicity… a fine spirit’s lifelong wistful brooding upon the loveliness of earth.” It gained popularity in the 1960’s when the English cellist Jacqueline du Pré recorded it. Additional landmark recordings have been made by Pablo Casals, Paul Tortelier, and Yo-Yo Ma.

The second half of the program begins with Gioachino Rossini’s William Tell Overture – Finale. Most remembered as the theme music for the Lone Ranger in radio, television and film, this melody was borrowed from Rossini’s final opera.

The Concerto in Eb Major for Oboe and Trumpet was written by Johann Wilhelm Hertel in 1754. Much of Hertel’s work is in the “galant style,” transitional between the Baroque and Classical periods. The first movement is reminiscent of the Baroque period with its perpetual motion sequences, contrapuntal writing, and frequent ornaments. The second movement has a Classical period feel with longer melodies and simple homophonic accompaniment. The third movement is a combination of Baroque and Classical styles as the oboe and trumpet engage in a lively musical conversation.

The concert concludes with Franz Joseph Haydn’s Symphony No. 45 in F# Minor known as the “Farewell Symphony.” This symphony, dated 1772, was composed for Haydn’s patron, Nikolaus I, Prince Esterházy, who was residing, along with his musicians and retinue, at his favorite summer palace at Eszterháza in rural Hungary. Their stay had been longer than expected, and most of the musicians had to leave their families at home in Eisenstadt, about a day’s journey away. Longing to return, the musicians appealed to Haydn for help. The diplomatic Haydn, instead of making a direct appeal, put his request into the music of the symphony. During the final movement, each musician stops playing, and leaves in turn, so that at the end, there are just two muted violins left, played by Haydn himself and his concertmaster. It is particularly poignant that a work so titled is the piece ending Maestro Kozacek’s final concert as Music Director of the Sinfonietta. All attendees are invited to a reception following the concert to thank Maestro Kozacek for his five years of service to the Sinfonietta.

This concert is co-sponsored by Marion Maby and Sai Chang, and John and Ann Steinbrunner. Discounted tickets are available on the Sinfonietta website: VVSinfonietta.org. Tickets at the door are available with surcharge.