Clarkdale AZ (October 19, 2018) – Bread & Puppet Theater, the internationally celebrated company that champions a visually rich, street-theater brand of performance art filled with music, dance and slapstick comes to Clarkdale on Saturday, November 10th with two shows. The Grasshopper Rebellion Circus, (suitable or families) explains and teaches riot and rebellion against intolerable situations with the help of state of the art paper-maché weaponry and the appropriately riotous Bread and Puppet Brass Band, and The Basic Byebye Show, a manifesto on transformation inspired by Albrecht Dürer’s apocalyptic woodcuts and the daily news.

Its shows are political and spectacular, with huge puppets made of paper maché and cardboard. Founded in 1963 by Peter Schumann on New York City’s Lower East Side, the theater has been based in the North East Kingdom of Vermont since the early 1970s. 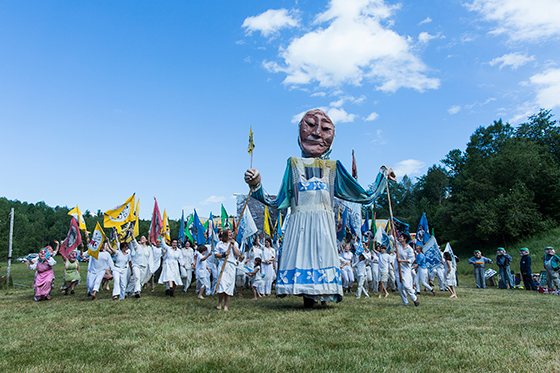 Setting up in the fabulous Clarkdale Memorial Clubhouse Auditorium, Hall, Bread and Puppet will play the colorful, fast-paced Circus in the afternoon, and then change over their set in order to present the intense, black and white Basic Byebye in the evening.

The Basic Byebye Show expands on the traditional byebyes of funerals and train stations by turning byebye-saying into a political act. “The Basic Byebye Show originally set out to define and illuminate the need for basic byebyes in our culture, but has progressed to respond to the event of regular mass shootings, in particular the recent massacre in the Florida high school”, says director Peter Schumann. “The theme is the birth of the gun by the 2nd Amendment Holy Cow, presided over by James Madison, which leads to the routine occurrence of horror and ends with the funeralization of that ill-conceived symbol of a free people.” Basic Byebye mourns the victims of gun massacres and turns this mourning toward the transformative political possibility of saying byebye to the gun once and for all.

Bread and Puppet’s performances in Clarkdale come as part of a 14-week tour across the continent and back with The Grasshopper Rebellion Circus and The Basic Byebye Show. Please contact Josh Krugman (jrkrugman@gmail.com; 802-525-3031) with further questions, or for interview with company members and B&P director, Peter Schumann.

For more information on the event please visit http://breadandpuppet.org/ or www.RedEarththeatre.org