‘I, Claude Monet’ in Exhibition on Screen
in Sedona on April 17

Sedona AZ (April 4, 2017) – Sedona International Film Festival presents the Exhibition on Screen series with “I, Claude Monet”. The event will show in Sedona on Monday, April 17 at 4 and 7 p.m. at the festival’s Mary D. Fisher Theatre. This is the second in a series of four featured programs.

Discover the fascinating inner life of one of the world’s most famous artists. “I, Claude Monet”, a fresh new documentary based entirely on Claude Monet’s personal letters, will reveal Monet the artist, businessman and lover as never before. 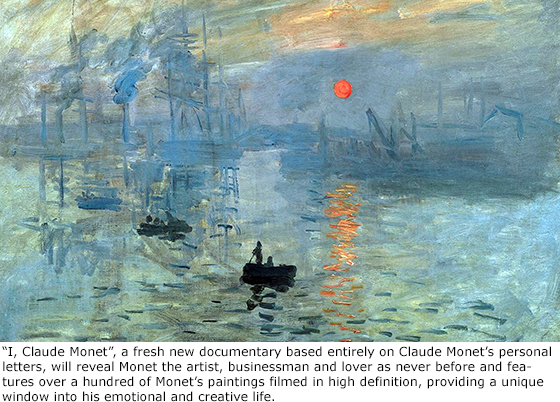 Disposing of traditional narration and talking heads, “I, Claude Monet” allows Monet to tell his story in his own words. Based on three thousand surviving letters, the film reveals a tumultuous inner life marked by moments of intense depression and euphoric creation, offering a complex portrait of one of the world’s best loved artists.

“I, Claude Monet” also features over a hundred of Monet’s paintings filmed in high definition, providing a unique window into his emotional and creative life.

Brought to life by acclaimed actor Henry Goodman, Monet’s letters record his journey from prodigiously talented teenager to the grand old man of arts. They record remarkable encounters — from the painter Eugène Boudin, who he met as an enthusiastic amateur, to Prime Minister Georges Clemenceau, with whom he struck up a friendship as an elderly man.

Many letters confront Monet’s despair, depression, and even attempted suicide, as a result of poverty, obscurity, ill-health and his relationships with his wives — Camille Doncieux and, secondly, Alice Hoschedé. But in equal measure his correspondence, the film celebrates the joys of painting and the natural world, inspired by his travels across Europe. In order to capture this euphoria, the film travels to the very spots Monet painted and wrote his letters, from Paris to Venice, London to Le Havre.

“I, Claude Monet” will be shown at the Mary D. Fisher Theatre on Monday, April 17 at 4 and 7 p.m. Tickets are $15, or $12.50 for Film Festival members. Tickets are available in advance at the Sedona International Film Festival office or by calling 928-282-1177 or online at www.SedonaFilmFestival.org. Both the theatre and film festival office are located at 2030 W. Hwy. 89A, in West Sedona.