Sedona AZ (December 21, 2011) – Yesterday afternoon, YCSO detectives from the Criminal Investigations Bureau served a search warrant in the 5100 block of S. Mill Avenue, Tempe, Arizona. A suspect, identified as 33-year-old Oshin Thomas, was arrested in an apartment on Mill Avenue for the Sedona burglary. In recent days, detectives developed information linking Thomas to the theft based on a prior business relationship with the victim and evidence obtained during the investigation. While in Tempe, detectives 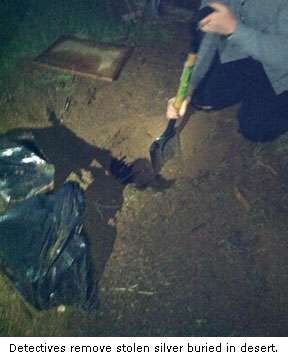 Today, detectives continue their work to find remaining stolen silver and gold hidden in Arizona and California locations. Detectives expect to recover a majority of the stolen property which has a total estimated value exceeding $600,000 dollars.

Updates are expected as the investigation continues.

Sedona AZ (December 18, 2011) – On December 9, 2011, just before 8 PM, Yavapai County Sheriff’s Office deputies were called to the 11500 block of Boynton Pass Road in Sedona regarding a residential burglary. Upon arrival, deputies met with the resident who was waiting outside after finding glass in a back door had been smashed out. She had left her home around 2:30 PM the same day and all doors were secured. Believing someone may still be inside, she waited with a neighbor until deputies could safely clear the home. No suspects were found and the victim began checking to determine if any property had been stolen. Although the house was not obviously ransacked, the victim did notice a storage room door had been pried open and gold and silver pieces valued in the thousands were gone.

YCSO is seeking anyone with information on this burglary to contact Detective John Johnson at 928-554-8575 or Yavapai Silent Witness at 1800-932-3232. Callers to Silent Witness remain anonymous and will be eligible for a cash reward if an arrest is made in the case.