Hawaiian Musicians, HAPA, at the
Coconino Center for the Arts

Flagstaff AZ (March 24, 2014) – Hawai`i’s talented music duo, HAPA, returns to Flagstaff on March 27.  Known for their superior musical talents and knowledge of Hawaiian music, Barry Flanagan and Ron Kuala`au put on a show that is a delight to fans of all types of music.  Their understanding of Hawaiian culture and the Hawaiian language makes their music especially appealing to those of us who love the Hawaiian culture and its music.  Their shows typically include traditional and contemporary music, often accompanied by hula. 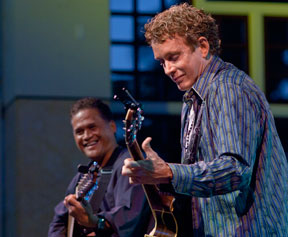 Barry and Ron have an interesting history.  When Barry was growing up in New Jersey his parents played Don Ho albums and he learned to love Hawaiian music.  As a young man he moved to Maui to study Hawaiian music and it was there that he met and studied under Ron Kuala`au.  He says Maui “was like the College of Hawaiian Music and Ron was a professor.”  It was the beginning of the Hawaiian Renaissance and the sharp rise in interest in Hawaiian music combined with the rapid expansion of music venues created many opportunities for Hawaiian musicians.  Barry spent the next 10 years doing 500 gigs a year.  He calls it, “A Jersey boy’s 10 year thesis on Life in Hawai’i.”  He only planned to stay one year but he says “I fell in love with the place and with the feeling of being a Pacific Islander.  I still seek out Hawaiians and Pacific Islanders and learn as much as I can from them.”  After thirty years of friendship Barry and Ron teamed up three years ago to create a sound that has been called “The Simon and Garfunkel of Hawaiian music.”  Recently adding bass player Tarvin Makia has given Barry more time to play his “A-game” lead guitar.

It was Don Ho who influenced Barry to tour every year and perform in small towns, not just big cities.  Barry has found this to be good advice, saying, “I love going into small towns and playing.  You meet every single person in the theater.”  How does he choose the small towns?  “Have they had a Hawaiian concert before?  No? Then book it.” 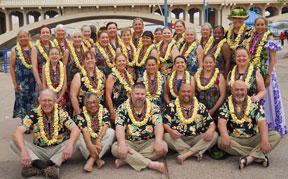 When asked “Why do you keep coming back to Flagstaff?” Barry responded that he had stayed in Flagstaff on a hitchhiking trip across the country in 1978 and found it to be a “very spiritual and beautiful part of the world.”  About nine years ago, when he was planning a trip to Scottsdale to receive the “Cultural Act of the Year” award, he learned that Kehau Chrisman, a classically trained Kumu Hula in the Aunti Maiki Aiu Lake Hula lineage, was here in N. AZ.  He immediately knew he wanted to come to Flagstaff to do a concert with her and her dancers, Halau Hula Napuaokalei`ilima.  Barry says, “It’s not a money thing.  We just love the place so much!  We love the town, we love Kehau!  She exemplifies what Hawai’i is.”  At Barry’s request, Kehau will perform a hula to the title song from their latest album, Tuahine – a song honoring all women who are strong while retaining their gentleness.