Sedona AZ (September 9, 2013) – Filmed on location at the Ananda communities in California, Italy, and India, Finding Happiness follows a young woman as she spends a week with the residents of Ananda, who answer her questions and welcome her to a reality she had never imagined possible. The documentary film will be shown at Unity of Sedona on September 19 at 7pm. 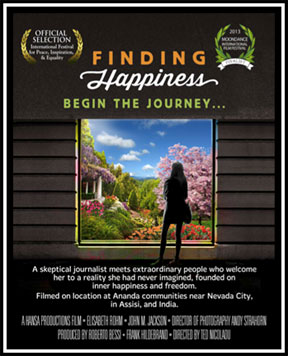 We meet a group of people who, in their own unscripted words, have journeyed from idealism, to inner transformation, using practical, viable solutions for a sustainable, harmonious, fulfilling way of life. In talking with the residents and especially those with Kriyananda, she comes face-to-face with her own odyssey through life and her own quest for happiness. His answers lead her to discover not only the facts about the community, but the universal truths that hold the power to transform her own life.

The story has its origins in the 1920s when yoga arrived on America’s shores in the person of Paramhansa Yogananda, whose book Autobiography of a Yogi is the best-read autobiography of all time. Yogananda’s mission included two key points that powerfully influenced his young disciple, J. Donald Walters, later renowned as Swami Kriyananda. First, personal change starts within. Second, our environment greatly influences our search for happiness. Yogananda envisioned places where people could put high principles into action – “world brotherhood colonies,” he called them. In 1968, Swami Kriyananda founded the first community near Nevada City, California, in the beautiful foothills of the Sierra Nevada.