Film Festival presents
‘The First Monday in May’ premiere May 2

The perfect marriage of fashion, culture and bravura filmmaking debuts at Fisher Theatre

Sedona AZ (April 22, 2016) – The Sedona International Film Festival is proud to present the Northern Arizona premiere of the critically-acclaimed, award-winning “The First Monday in May” showing (appropriately) on the first Monday in May: Monday, May 2 at 4 and 7 p.m. at the Mary D. Fisher Theatre.

“The First Monday in May” is your ticket to the most exclusive event in the world. It is the perfect marriage of fashion, culture and bravura filmmaking.

An unprecedented look behind the scenes of two of New York’s premier cultural events, “The First Monday” in May follows the creation of “China: Through The Looking Glass” — the most attended fashion exhibition in the history of The Costume Institute at The Metropolitan Museum of Art — and the 2015 Met Gala, the star-studded fundraiser that celebrates the opening of the exhibition. 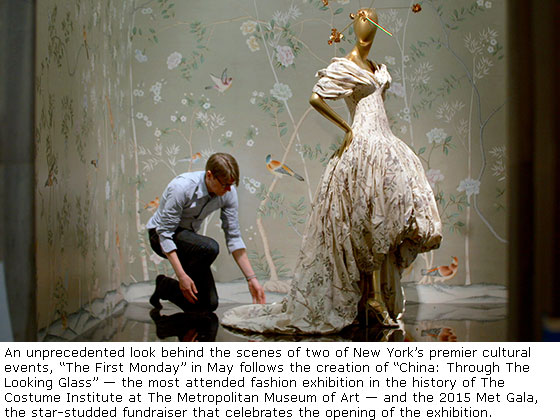 Acclaimed filmmaker Andrew Rossi (Page One: Inside the New York Times) follows Anna Wintour, Artistic Director of Condé Nast and editor-in-chief of Vogue magazine and longtime chair of the Met Gala, and Andrew Bolton, the iconoclastic curator who conceived the groundbreaking show, for eight months as they prepare for an evening they hope will take the worlds of art and fashion by storm.

Documenting one of the most exclusive parties in the world side-by-side with an exhibition that drew more than three-quarters of a million visitors during its four-month run, “The First Monday in May” is a captivating portrait of the private side of a pair of high-profile public events. The blockbuster exploration of Chinese-inspired Western fashions provides inspiration for the Met Gala’s annual collision of haute couture and celebrity, where Hollywood stars including Kate Hudson, George Clooney, Julianne Moore, Jennifer Lawrence, Gong Li, and Lady Gaga rub shoulders with Alicia Keyes, Kim Kardashian, Kanye West, Justin Bieber, Michael Bloomberg and contemporary pop icon Rihanna, who brings down the house with a stunning live performance.

“The First Monday in May” also reignites the debate over whether fashion can and should be viewed as art. Rossi speaks with renowned creators including filmmakers Wong Kar-Wai, Artistic Director of the exhibition, and Baz Luhrmann, as well preeminent fashion designers Karl Lagerfeld, Jean Paul Gaultier, Guo Pei and John Galliano. Thomas P. Campbell, Director of The Metropolitan Museum of Art, and Former Curator in Charge of The Costume Institute Harold Koda offer unexpected insights on the relationship between art, craft and commerce.

Critics are raving about “The First Monday in May”. New York Magazine calls the film “A moving tribute. An intimate behind-the-scenes look at the Costume Institute’s big spring exhibition, and fashion’s biggest party!”

“The First Monday in May” will show at the Mary D. Fisher Theatre on Monday, May 2 at 4 and 7 p.m. Tickets are $12, or $9 for Film Festival members. For tickets and more information, please call 928-282-1177. Both the theatre and film festival office are located at 2030 W. Hwy. 89A, in West Sedona. For more information, visit: www.SedonaFilmFestival.org.