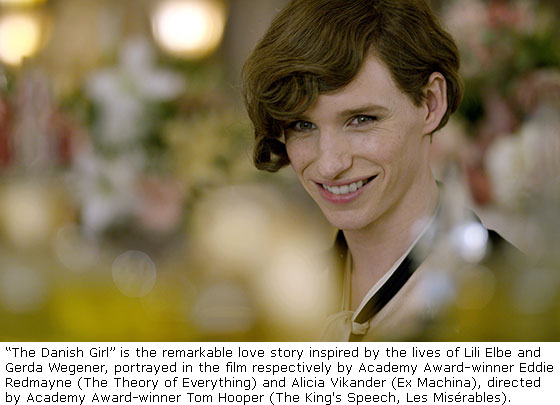 In 1926 in Copenhagen, artist Einar Wegener is married to Gerda Wegener and is revered for landscape paintings. Gerda is also an artist, less renowned but steadily working as a portraitist of prominent citizens. Theirs is a strong and loving marriage, yet personal and professional epiphanies have eluded them both.

That all begins to change one day when, on deadline for a portrait, Gerda asks her husband to fill in for a model by putting on a dress so that she can finish the painting. The experience is transformative, as Einar soon realizes that being Lili is an expression of her truest self, and she begins living her life as a woman. Gerda unexpectedly finds that she has a new muse, and renewed creative ferment. But the couple soon brush up against society’s disapproval.

They leave their homeland for the more open-minded world of Paris. There, it is Gerda’s career that continues to flourish. The couple’s marriage evolves -and not without strain. But again and again Gerda supports Lili during her journey as a transgender woman. Through the other, each of them finds the courage to be who they are at heart.

In an adaptation of Patricia Highsmith’s seminal novel The Price of Salt, “Carol” follows two women from very different backgrounds who find themselves in an unexpected love affair in 1950s New York. As conventional norms of the time challenge their undeniable attraction, an honest story emerges to reveal the resilience of the heart in the face of change. 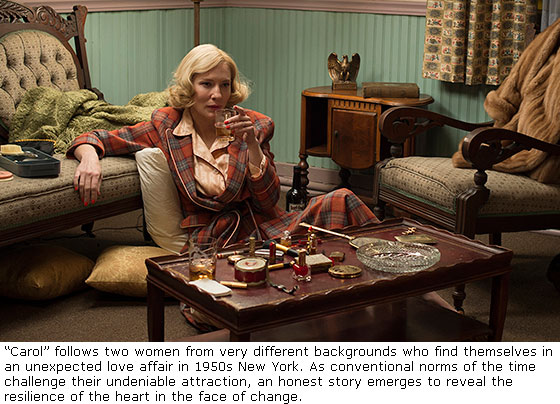 A young woman in her 20s, Therese Belivet (Rooney Mara), is a clerk working in a Manhattan department store and dreaming of a more fulfilling life when she meets Carol (Cate Blanchett), an alluring woman trapped in a loveless, convenient marriage. As an immediate connection sparks between them, the innocence of their first encounter dims and their connection deepens.

While Carol breaks free from the confines of marriage, her husband (Kyle Chandler) begins to question her competence as a mother as her involvement with Therese and close relationship with her best friend Abby (Sarah Paulson) come to light.