Critics are raving, calling the film “A must-see because it has unimaginable power. It is a cinematic masterpiece that overwhelms the body and mind!” (Anne Sinclaire, Huffington Post) 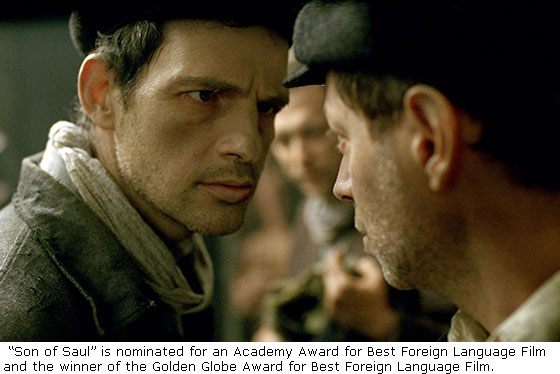 Ann Hornaday from The Washington Post raves, “ ‘Son of Saul’ re-defines the Holocaust-drama genre, infusing it with new urgency, visual energy and moral meaning!” And the Chicago Tribune calls the film “A powerful movie … a remarkable feature filmmaking debut!”

October 1944, Auschwitz-Birkenau. Saul Ausländer is a Hungarian member of the Sonderkommando, the group of Jewish prisoners isolated from the camp and forced to assist the Nazis in the machinery of large-scale extermination.

While working in one of the crematoriums, Saul discovers the body of a boy he takes for his son. As the Sonderkommando plans a rebellion, Saul decides to carry out an impossible task: save the child’s body from the flames, find a rabbi to recite the mourner’s Kaddish and offer the boy a proper burial.

James Franco stars in “Yosemite”, a new feature film adapted from and based on his short stories. Critics are raving about the film, calling it “intimate and affecting …. impressive and absorbing” (The Hollywood Reporter). It has also been called a “Stand By Me” for a modern generation. “Yosemite” has played to audience raves at prestigious film festivals around the country. 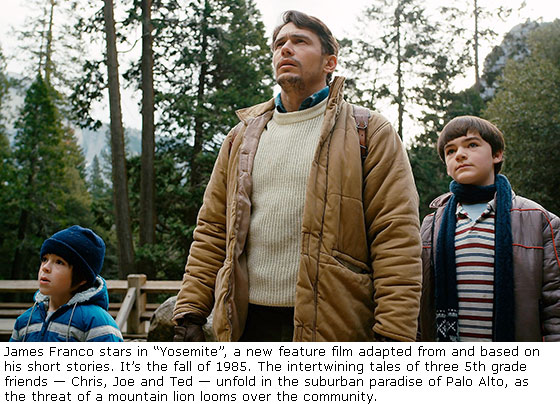 It’s the fall of 1985. The intertwining tales of three 5th grade friends — Chris, Joe and Ted — unfold in the suburban paradise of Palo Alto, as the threat of a mountain lion looms over the community.

Chris drives up to Yosemite for the weekend with his dad and discovers a corpse in the woods. Joe, left to his own devices by his babysitter, befriends a lonely drifter who shares his love of comic books.

Meanwhile, a mountain lion is spotted in Palo Alto in broad daylight and Ted searches for his cat, who has gone missing.

“Yosemite” is based on the short stories “Yosemite” and “Peter Parker” from James Franco’s collection “A California Childhood”.

“Evocative and nicely observed,” says the Los Angeles Times. “The performances are naturalistic and engaging.”