Sedona AZ (November 17, 2011) – The audience and critical sensation that is making waves and headlines all across the country ­ “Margin Call” ­ debuts in Sedona on Tuesday, Nov. 29 as part of the Sedona International Film Festival’s Tuesday Cinema Series. The festival is proud to present the Northern Arizona premiere of this timely and powerful dramatic thriller. There will be two screenings of the film at 4:00 p.m. and 7:00 p.m. at the Sedona Performing Arts Center. 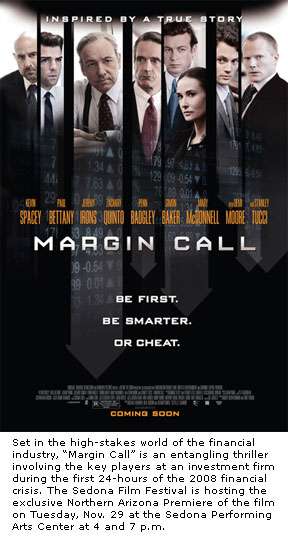 Set in the high-stakes world of the financial industry, “Margin Call” is an entangling thriller involving the key players at an investment firm during the first 24-hours of the 2008 financial crisis. When an entry-level analyst unlocks information that could prove to be the downfall of the firm, a roller-coaster ride ensues as decisions both financial and moral catapult the lives of all involved to the brink of disaster.

Writer/director J.C. Chandor’s enthralling first feature is a stark and bravely authentic portrayal of the financial industry and its denizens as they confront the decisions that shape our global future.

In the wake of the crisis that rocked the world’s financial markets in 2008, a lot of people asked the same question of the engineers of the disaster: How does a man confront the fact of failure, a failure that might not only cost him his job, but cost millions of people their entire livelihoods?

A riveting thriller, “Margin Call” takes us where no film has taken us before: inside the heart of one of Wall Street’s too-big-to-fail financial titans, a sharply-etched snapshot of a world and a group of people on the brink of collapse.

“Margin Call” takes us from the moment of dawning suspicion that something is terribly wrong, to the full recognition of the scope of the disaster, to the sifting through the wreckage ­ both personal and financial ­ when the final bell rings and the “bloodbath” of trading comes to a close. From junior analysts to CEO titans, every member of the corporate hierarchy must come to grips with the nightmare-come-true, and their own roles in creating it.

While it’s possible to say, without exaggeration, that the financial crisis has affected virtually everyone on the planet, the roots of “Margin Call” emerge from a highly personal place for writer/director Chandor.

“I think a lot of people have wondered where I sort of gained a fundamental understanding of this industry, not having worked in it,” he shares. “But my father worked in this business, for Merrill Lynch, for almost 40 years, so I certainly had a fundamental knowledge of the people in this world and most importantly had a strong understanding of what and who they cared most about.”

Chandor consulted with his father and a wide array of financial industry veterans who played an important role in ensuring “Margin Call” was an authentic representation of the scenarios and personalities that are specific to the financial industry.

The series is made possible by a grant from the Arizona Commission on the Arts and National Endowment for the Arts, the City of Sedona, and the Sedona Community Foundation.

“Margin Call” will be shown at the Sedona Performing Arts Center on Tuesday, Nov. 29 at 4:00 and 7:00 p.m. Tickets are $12, or $9 for Film Festival members, and will be available starting at 3:00 p.m. that day in the SPAC lobby. Tickets are available for everyone now at the Sedona International Film Festival office, 2030 W. Hwy. 89A, Suite A3, or by calling 282-1177. For more information, visit: www.SedonaFilmFestival.com.