Just in time for the tax deadline! Comedy debuts one night only at Fisher Theatre

Sedona AZ (March 30, 2017) – The Sedona International Film Festival is proud to present a one-night only special premiere of the timely new comedy “Love & Taxes” on Thursday, April 13 at 4 and 7 p.m. at the Mary D. Fisher Theatre.

“Love & Taxes” is a riveting comic tale of seven years of tax avoidance. Following the possibly real-life exploits of Josh Kornbluth — an autobiographical monologist — “Love & Taxes” is a comedy that blends solo performance and scripted scenes to bring the subjective reality of the storyteller hilariously to life.

Despite working for a high-powered tax attorney, Josh — who, for his whole life, has been clinging to his red-diaper-baby, fringe identity — hasn’t filed his taxes in seven years. But when his boss persuades him to join the system, almost mystically things start going well for Josh. His performing career takes off, his solo shows are “optioned” by major Hollywood studios, he and his brother Jake decide to make movies together — and he meets the woman of his dreams, Sara. 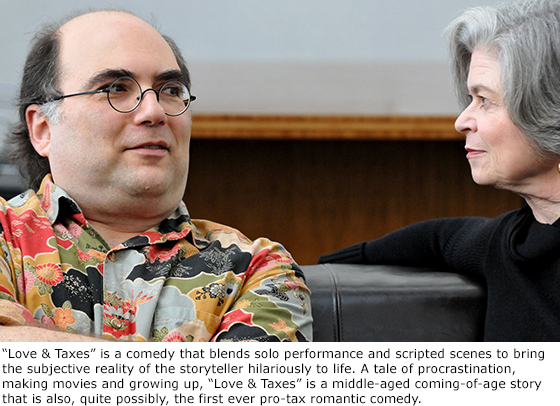 But while Sara wants Josh to join society and take care of his debts, Josh isn’t paying attention to his finances, and has fallen for the manipulations of an unscrupulous tax lawyer, who now might own the rights to his and his brother’s film. Josh soon finds himself broke: his tax-avoidance problems have ballooned into a tax nightmare that threatens all of the great new things in his life.

“Love & Taxes” is a middle-aged coming-of-age story that is also, quite possibly, the first ever pro-tax romantic comedy. Above all, “Love & Taxes” is the perfect comedy for our troubled political times.

“Love & Taxes” will show at the Mary D. Fisher Theatre on Thursday, April 13 at 4 and 7 p.m. Tickets are $12, or $9 for Film Festival members. For tickets and more information, please call 928-282-1177. Both the theatre and film festival office are located at 2030 W. Hwy. 89A, in West Sedona. For more information, visit: www.SedonaFilmFestival.org.