Sedona AZ (January 15, 2016) – The Sedona International Film Festival is proud to present the Northern Arizona premiere of “Johnny Cash: American Rebel” — featuring an all-star cast of who’s who in the music business — showing Jan. 22-28 at the Mary D. Fisher Theatre. Producer and co-director Derik Murry will be in Sedona to host the film and Q&A at the Friday and Monday screenings.

“Johnny Cash: American Rebel” is a celebration of the larger-than-life Johnny Cash from the unique perspective of the Man in Black’s greatest songs, the “essentials”. Each song brings to life a chapter in the story of America from the 1950s to modern day, as we tour the life of music and artist expression of one of music’s most notorious rebels.

Combining cinematically filmed original interviews with Johnny Cash’s family, friends, and a broad array of international superstars from the music and entertainment industries, along with a soundtrack of Cash’s most famous songs, archival concert footage, classic photographs, family snapshots and personal artefacts from the Cash family, “Johnny Cash: American Rebel” is an epic tribute to this gifted artist, fighter of causes, and legendary entertainer. 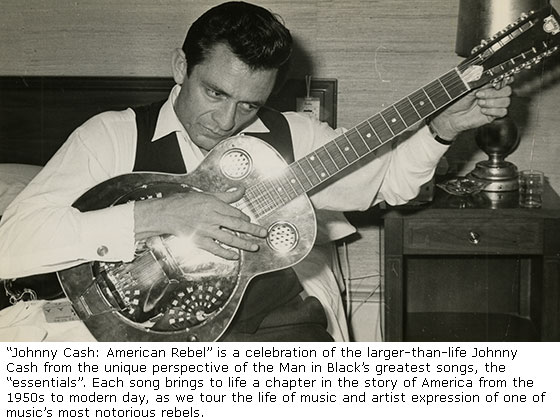 The film is directed by Jordan Tappis and Derik Murray, and produced by Derik Murray. Murray’s credits include producing the Academy Award shortlisted “Facing Ali”, a feature documentary and “I Am Bruce Lee”, which made its US television premiere on Spike TV where it garnered the highest ratings for a documentary in the network’s history. He produced “I Am Steve McQueen”, produced and co-directed “I Am Evel Knievel” and “I Am Chris Farley”.