Film Festival presents ‘I Called Him Morgan’
premiere May 18

Sedona AZ (May 5, 2017) – The Sedona International Film Festival is proud to present a one-night only special premiere of the award-winning new documentary “I Called Him Morgan” on Thursday, May 18 at 4 and 7 p.m. at the Mary D. Fisher Theatre.

On a snowy night in February 1972, legendary jazz trumpeter Lee Morgan was shot dead by his common-law wife, Helen, during a gig at a club in New York City. The murder sent shockwaves through the jazz community, and the memory of the event still haunts the people who knew the Morgans.

Helen served time for the crime and, following her release, retreated into obscurity. Over 20 years later, a chance encounter led her to give a remarkable interview.

Helen’s revealing audio “testimony” acts as a refrain throughout the film, which draws together a wealth of archival photographs and footage, interviews with friends and bandmates and incredible jazz music to tell the ill-fated pair’s story.

Part true-crime tale, part love story, and an all-out musical treat, “I Called Him Morgan” is a stirring tribute to two unique personalities and the music that brought them together. 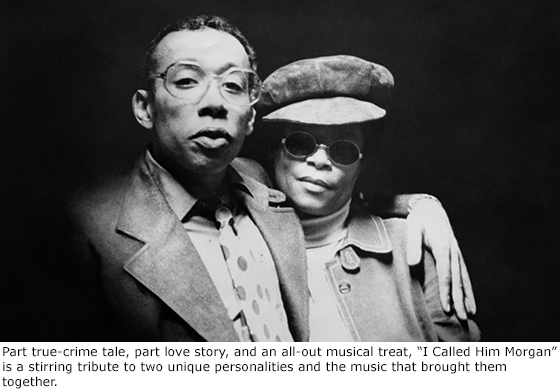 One of the greatest jazz trumpeters of all time, Lee Morgan burst on the bebop scene in 1956 with a signature “hard bop” style as known for eloquence as inventiveness. He enjoyed a long career despite his short life, recording 25 albums for Blue Note Records, and composing and playing crossover hits such as “The Sidewinder,” which went to the Top 10 on the R & B charts and Top 25 on the Pop charts — a rare feat for an instrumental jazz track.

“From the story of one complex relationship, (director) Kasper Collin builds a resonant portrait of an enduringly influential scene and era.” — The New Yorker

“One of the most unconventional, spellbinding music-related documentaries ever made.” — Telluride Film Festival

“I Called Him Morgan” will show at the Mary D. Fisher Theatre on Thursday, May 18 at 4 and 7 p.m. Tickets are $12, or $9 for Film Festival members. For tickets and more information, please call 928-282-1177. Both the theatre and film festival office are located at 2030 W. Hwy. 89A, in West Sedona. For more information, visit: www.SedonaFilmFestival.org.