Sedona AZ (February 23, 2017) – The Sedona International Film Festival presents Ballet in Cinema on Sunday, March 5 when it hosts the big screen premiere of “Woolf Works” from the Royal Ballet in London. There will be one show at 3:00 p.m. at the festival’s Mary D. Fisher Theatre.

Wayne McGregor’s ballet triptych “Woolf Works” — inspired by the writings of Virginia Woolf — met with outstanding critical acclaim on its premiere in 2015, and went on to win McGregor the Critics’ Circle Award for Best Classical Choreography and the Olivier Award for Best New Dance Production.

Alessandra Ferri and Federico Bonelli lead the cast of principal dancers and the corps of the Royal Ballet in this extraordinary production.

The Observer described it as ‘a compellingly moving experience’; for The Independent it ‘glows with ambition… a brave, thoughtful work’; The Guardian concluded that ‘it takes both McGregor — and the concept of the three-act ballet — to a brave and entirely exhilarating new place’. 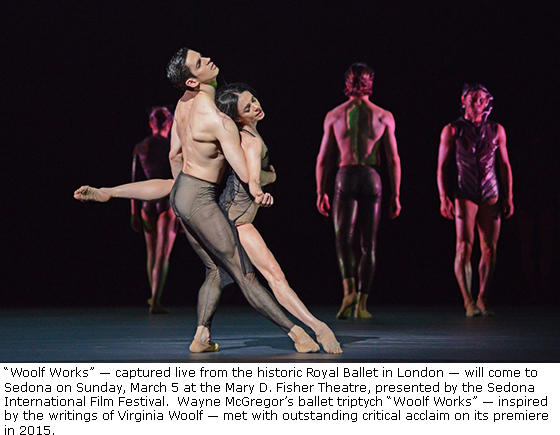 “Woolf Works” explores human relationships through dance. Each of the three acts springs from one of Woolf’s landmark novels: Mrs Dalloway, Orlando and The Waves — but these inspirations are also enmeshed with elements from her letters, essays and diaries. “Woolf Works” expresses the heart of an artistic life driven to discover a freer, uniquely modern realism, and brings to life Woolf’s world of ‘granite and rainbow’, where human beings are at once both physical body and uncontained essence.

“Woolf Works” was McGregor’s first full-length work for The Royal Ballet, and saw him reunited with regular collaborator Max Richter, who provides a commissioned score incorporating electronic and orchestral music.

“Woolf Works” will be shown at the Mary D. Fisher Theatre one day only: Sunday, March 5 at 3 p.m. Tickets are $15, or $12.50 for Film Festival members. For tickets and more information, please call 928-282-1177. Both the theatre and film festival office are located at 2030 W. Hwy. 89A, in West Sedona. For more information, visit: www.SedonaFilmFestival.org.