Film Festival hosts Ballet in Cinema:
‘A Hero of Our Time’ April 9

Sedona AZ (March 29, 2017) – The Sedona International Film Festival presents Ballet in Cinema on Sunday, April 9 when it hosts the big screen premiere of “A Hero of Our Time” from the Bolshoi Ballet in Moscow. There will be one show at 3:00 p.m. at the festival’s Mary D. Fisher Theatre.

“A Hero of Our Time” features music by Ilya Demutsky, choreography by Yuri Possokhov and libretto by Kirill Serebrennikov. The cast includes the Bolshoi’s principal dancers and the corps de ballet from the Bolshoi.

Pechorin, a young officer, embarks on a journey across the majestic mountains of the Caucasus, on a path set by his passionate encounters. Disillusioned and careless, he inflicts pain upon himself and the women around him. 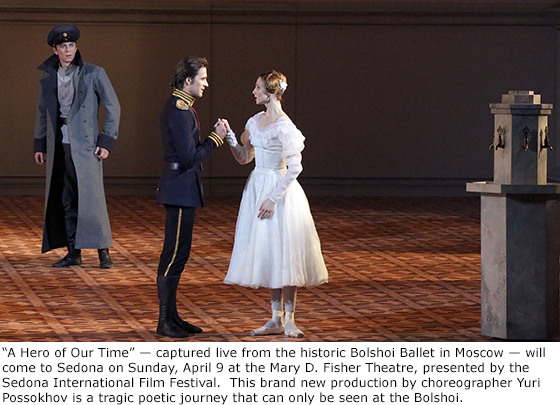 “Give me everything, it is still not enough.” The story based on the larger-than-life hero Pechorin is adapted from Mikhail Lermontov’s literary masterpiece in three separate stories recounting his heartbreaking betrayals. Is Pechorin a real hero? Or is he a man like any other?

“A Hero of Our Time” is a quintessentially poetical and inwardly musical work. And where there is poetry there is ballet.

Three of the five novellas which make up the novel, have been chosen for the ballet — Bela, Taman, Princess Mary. And in each one of these three parts in the ballet, Pechorin is quite different. He is changed by circumstance, age, the way in which he is presented: In Bela he is seen through the eyes of another character, while in Taman and Princess Mary, he “speaks” for himself, via the chapters of his diary.

This brand new production by choreographer Yuri Possokhov is a tragic poetic journey that can only be seen at the Bolshoi.