Film Festival and V.V. Sanctuary present
‘I Am Evidence’ April 26

Sedona AZ (April 18, 2018) – The Sedona International Film Festival is proud partner with Verde Valley Sanctuary to present a one-night only special premiere of the award-winning documentary “I Am Evidence” on Thursday, April 26 at 7 p.m. at the Mary D. Fisher Theatre.

The film screening will be followed by a Q&A and community panel discussion.

“I Am Evidence” exposes the shocking number of untested rape kits in the United States today. Despite the power of DNA to solve and prevent crimes, hundreds of thousands of kits containing potentially crucial DNA evidence languish untested in police evidence storage rooms across the country. Behind each of these kits lies an individual’s unresolved sexual assault case. 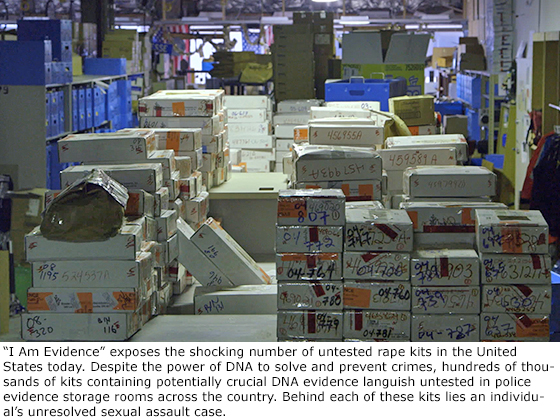 Produced by Mariska Hargitay, “I Am Evidence” follows stories of survivors who have waited years for their kits to be tested, as well as the law enforcement officials who are leading the charge to work through the backlog and pursue long-awaited justice in these cases.

The film reveals the high cost of the lingering lassitude surrounding rape investigations in this country, and the positive effects of treating survivors with the respect they deserve and an opportunity for justice.

Additionally, “I Am Evidence” follows survivors’ experiences as they trace the fates of their kits and reengage in the criminal justice process, which shows the disturbing pattern of how the system has historically treated sexual assault victims.

Testing every rape kit sends a clear and powerful message to survivors that they matter — and that there is a path to healing and justice.

Join us for this important and powerful film and stay for a Q&A and community panel discussion. The discussion will be facilitated by Jennifer Perry, Development Director of Verde Valley Sanctuary, and the panel will include:

“I Am Evidence” will show at the Mary D. Fisher Theatre on Thursday, April 26 at 7 p.m. Tickets are $12, or $9 for Film Festival members. For tickets and more information, please call 928-282-1177. Both the theatre and film festival office are located at 2030 W. Hwy. 89A, in West Sedona. For more information, visit: www.SedonaFilmFestival.org.