Sedona AZ (May 23, 2013) – The Sedona International Film Festival is proud to partner with Chamber Music Sedona to kick off the 7th annual Sedona Bluegrass Festival celebration by presenting “Grateful Dawg” on the big screen on Wednesday, June 5. There will be one show at 7:00 p.m. at the festival’s Mary D. Fisher Theatre.

“We’re delighted to work with Patrick on this project,” said Bluegrass Festival director Bert Harclerode. “When we signed David as this year’s headliner, Grateful Dawg was the perfect fit as we combined efforts.” 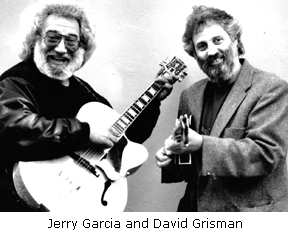 The documentary offers a unique retrospective of Jerry Garcia and David Grisman’s musical kinship that reflects the true spirit of their collaboration and offers an intimate, inside look for longtime and newer fans to enjoy.

“Grateful Dawg” offers a unique retrospective of Jerry Garcia and David Grisman’s musical kinship that reflects the true spirit of their collaboration and offers an intimate, inside look for longtime and newer fans to enjoy.

In 1964, at a folk venue called Sunset Park in Pennsylvania, a young banjo player from San Francisco struck up a conversation with a mandolin player from New Jersey, in between sets of a concert by the father of bluegrass, Bill Monroe.  Nearly a decade later, they would form one of the most popular bluegrass groups in musical history; twenty-five years after their first meeting, the two troubadours would release a series of albums that would delight and entertain fans of all ages and musical persuasions.

And also in that time frame, Jerry Garcia would pick up the electric guitar and co-found the Grateful Dead, one of the most popular and influential musical groups ever; and David Grisman would revolutionize his instrument, develop a new sub-genre of folk music, eventually be dubbed “the Paganini of the mandolin” by the New York Times, and become one of the world’s foremost performers, scholars, composers, producers and distributors of acoustic music.

The deeply rooted musical friendship between Jerry Garcia and David Grisman is exquisitely detailed in “Grateful Dawg”. Directed by Gillian Grisman, the film includes live Garcia/Grisman performances as well as rare and unique personal moments from the studio, backstage and home-style jam sessions.  Interviews with friends and family are intertwined with live and archival elements, creating an intimate portrait of Jerry and David’s relationship.

“Grateful Dawg” traces the Garcia/Grisman connection from their earliest days as budding bluegrass afficionados, through the creation of the legendary Old & In the Way in the mid ‘70s, to the Garcia/Grisman Band that highlighted their love of traditional acoustic music in the ‘90s.  Included is rare footage from San Francisco’s Warfield Theatre and the Sweetwater in Mill Valley, the performance that marked the reunion of these two musical kindred spirits.

Grisman will perform Sunday, June 9 as part of the Saturday and Sunday June 8 & 9 Festival at Los Abrigados Resort in Sedona. For information visit www.SedonaBluegrassFestival.org

“Grateful Dawg” will be shown at the Mary D. Fisher Theatre on one day only: Wednesday, June 5 at 7:00 p.m. Tickets are $12 for general admission, or $9 for Film Festival or Chamber Music members. Tickets are available in advance at the Sedona International Film Festival office or by calling 282-1177. Both the theatre and film festival office are located at 2030 W. Hwy. 89A, in West Sedona. Visit www.SedonaFilmFestival.org for details.