Sedona AZ (May 6, 2017) – The Sedona International Film Festival is the official, exclusive Northern Arizona home for the New York Film Critics monthly series debuting new films weeks prior to their theatrical release. The series is hosted by Rolling Stone Magazine’s Peter Travers, via satellite, and features a Q&A with the filmmaker and stars from the film each month.

The May premiere event will feature the debut of Bette Gordon’s psychological thriller “The Drowning” for one show, one night only on Wednesday, May 17 at 7 p.m. Peter Travers will host and introduce the film; and the Q&A following the film will feature the stars of the film Julia Stiles and Josh Charles and director Bette Gordon.

“The Drowning” is the story of a forensic psychologist who is haunted by his expert witness testimony that sent a young boy to prison. When the boy later reappears in his life, he is drawn into a soul-searching reinvestigation of the case. 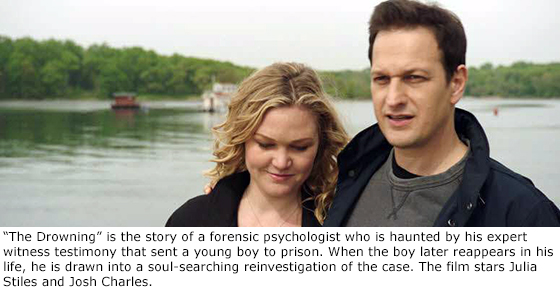 The film celebrates the psychological thriller genre with electrifying performances. Complex, riveting and unafraid to tread deep in murky pathological waters. “The Drowning” is a story of shifting identities that will keep you guessing until the very end.

Join us for a special evening and sneak premiere of this new drama, hosted by Peter Travers from Rolling Stone Magazine via satellite, and stay for the Q&A with Julia Stites and Josh Charles and director Bette Gordon.

The New York Film Critics Series premiere of “The Drowning” will take place at the Mary D. Fisher Theatre one day only: Wednesday, May 17 at 7 p.m. All tickets are $12 for this exclusive premiere event. For tickets and more information, please call 928-282-1177. Both the theatre and film festival office are located at 2030 W. Hwy. 89A, in West Sedona. For more information, visit: www.SedonaFilmFestival.org.