“Film Stars Don’t Die in Liverpool” is a true story about what happens when a Hollywood legend discovers romance.

Based on Peter Turner’s memoir, the film follows the playful but passionate relationship between Turner (Jamie Bell) and the eccentric Academy Award-winning actress Gloria Grahame (Annette Bening) in 1978 Liverpool. 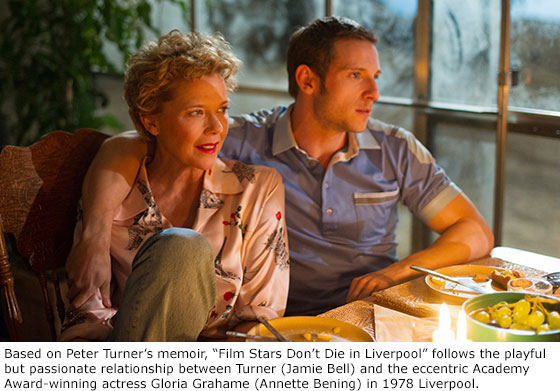 What starts as a vibrant affair between a legendary femme fatale and her young lover quickly grows into a deeper relationship, with Turner being the person Gloria turns to for comfort. Their passion and lust for life is tested to the limits by events beyond their control.

“Annette Bening is excellent as Gloria Grahame: Imperious, vulnerable, romantic. She and Jamie Bell are tremendous” — Peter Bradshaw, The Guardian

“Jamie Bell is absolutely riveting. This is definitely Bell’s most memorable performance since ‘Billy Elliot’.” — Stephen Farber, The Hollywood Reporter