Sedona AZ (March 16, 2018) – The Sedona International Film Festival presents Ballet in Cinema on Sunday, March 25 when it hosts the big screen premiere of “The Winter’s Tale” from the Royal Ballet in London. There will be one show at 4:00 p.m. at the festival’s Mary D. Fisher Theatre.

Take a voyage to Bohemia with The Royal Ballet in Christopher Wheeldon’s production of “The Winter’s Tale”, presented onscreen in cinemas worldwide. 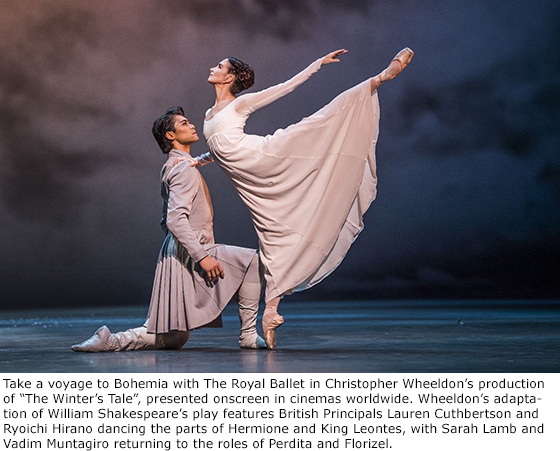 Wheeldon’s adaptation of William Shakespeare’s play features British Principals Lauren Cuthbertson and Ryoichi Hirano dancing the parts of Hermione and King Leontes, with Sarah Lamb and Vadim Muntagiro returning to the roles of Perdita and Florizel.

With designs by Bob Crowley, this production distils the essence of Shakespeare’s dramatic narrative, contrasting the stark, brooding atmosphere of King Leontes’ Sicilian court with the vivid color and pastoral charm of Bohemia. Complete with colorful costumes and mesmerizing stage effects, Wheeldon’s production is widely acclaimed as a modern classic, tracing an emotive journey of redemption and reconciliation as a compelling dance-drama.

Set to Joby Talbot’s eclectic score, “The Winter’s Tale” was created for The Royal Ballet in 2014, revived in 2016 and performed in Brisbane as part of the annual international tour in 2017. Nominated for an Olivier Award for Outstanding Achievement in Dance, the production won the 2014 Critics’ Circle National Dance Award for Best Classical Choreography.