For this concert the group will showcase new harp guitar originals, along with songs from their self-titled album “’Electric Harp Guitar Group” and their own arrangements of songs from the Beatles, Sting and Simon & Garfunkle. 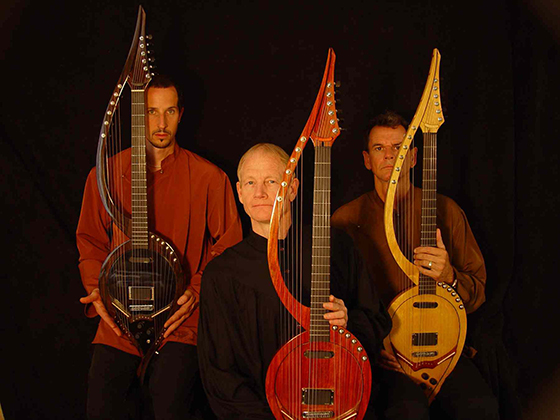 The group is finding its collective voice, and getting to a new level of musicianship,” Fitzhugh Jenkins remarked. “What is most satisfying is how the group has learned to meld the three instruments into one cohesive sonic texture,” William Eaton commented.  “Each moment is a practice of supporting each others efforts to compliment the open tunings, rhythms, melodies, percussive tapping, and unique timbre of each instrument.”  Anthony Mazzella added; “the improvised nature of our approach allows us the freedom to explore new ideas. Both rehearsal and concert is an experience of finding the spark and magic of what is being created in the moment.”

The trio initially formed several years ago when luthier William Eaton designed his proto-type electric harp guitar.  A long time fan of Anthony Mazzella and Fitzhugh Jenkins, Eaton invited them to try out the new instrument and join together to create the Electric Harp Guitar Group. After several months of rehearsal the trio spent time at Wisdom Tree Studios in Sedona to record their self-titled “Electric Harp Guitar Group” which was honored as one of the ‘Top 25 ‘Essential CD’s by Echoes’ – an internationally syndicated radio program.

Each musician brings diverse talent and creative technique to the ensemble.  Anthony Mazzella is recognized as one of the most innovative and technically proficient guitar players in the world, and was voted as “one of the top ten guitarists in the U.S.” by Guitar One magazine. Fitzhugh Jenkins has spent the last several years seeking out the elusive muse in his travels to Cuba, Buenos Aires, Spain, Ireland and other places. He studied guitar in France with Pierre Bensusan and will be leaving in march to study sound healing in Thailand.  Fitzhugh Jenkins has become renowned for his versatility on acoustic, classical, electric and bass guitars and his performing and recording career has taken him around the United States, Europe, India, Canada, and Hawaii.  William Eaton is acknowledged as one of the world’s great designers and builders of unique guitars and stringed instruments. He is a four-time GRAMMY nominee, NAMMY (Native American Music Awards) winner, and long time recording artist for Canyon Records.  Eaton is also the current director of the longest running guitar making school in North America, Roberto-Venn School of Luthiery, a school he co-founded in 1975 with John Roberts and Bob Venn.

The Electric Harp Guitar Group has sold out their past four shows at OTCA, so grab your tickets early and come enjoy a special evening of electric harp guitar music on Saturday, November 11th, 7:00 pm at Old Town Center for the Arts,

Old Town Center for the Arts Is located at 5th Street & Main in Old Town Cottonwood. Tickets for Electric Harp Guitar Group are $20 in advance, $22 at the door, and $25 for priority seating in the first three rows. Tickets are available online at showtix4u.com. Tickets are also available in Cottonwood at: Desert Dancer, and Mt Hope Foods and in Sedona at Local Juicery.  For upcoming events, visit www.oldtowncenter.org. For further information, contact Elena Bullard at 928-634-0940.