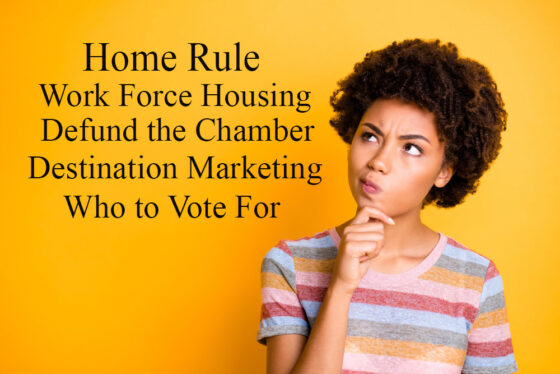 Sedona, AZ — What a dilemma! With such a fine group of candidates running for the city council this election choosing whom to vote for is a challenging task, indeed.

We have engineers, rocket scientists, scholars, businesspeople, and even a Hollywood actress running. Each brings to the table a different set of talents and abilities that could very well, set Sedona’s future.

Each has demonstrated a passion to serve and each emanates a sense of true dedication and desire to run our fine city.

So, in determining whom I would want to vote for, instead of focusing on each one and what they say they can achieve I would rather just define what I want or don’t want in a candidate.

First, regardless of the candidate’s ambitions, abilities, qualifications and promises, I find it extremely difficult to support one who is against Home Rule.

Sorry. Uh-uh. No way. Just the thought of the slogan “No Home Rule” turns my stomach. Ugh. Oh. Hold on.

Look, there are valid arguments from both sides that deserve consideration, I am sure. But for me? Nope!

No Home Rule is just as bad as the term “State Imposed,” as in State Imposed Expenditure Limitation.

The heck with the state imposing anything on me or my town. Don’t want it. I won’t accept it. Never!

Like one candidate said, it all depends on who sits on the council whether Home Rule is good or bad. They recommended leaving the vote to the people. I can ride with that, as long as the people vote to keep Home Rule.

My next consideration is whether the candidates support working with the Chamber of Commerce and Tourism Bureau. Anyone seeking to defund the Chamber most likely will not get my vote. Those wishing to work with the Chamber to create a more balanced relationship between the Chamber and the council, might.

No doubt about it. This has been the most-dismal summer season ever for tourism in Sedona. Sure, we business owners anticipate slowing down during this time of the year, but nothing like we are seeing now.

And I believe it’s the fault of the city for stopping destination marketing. We are feeling the pain now. We are reaping what we sowed. We need to get our tourists back. We need to untie the hands of the Chamber and let them do what they do best.

Those I would vote for would have to be pro-business, ready to cut city red tape for new projects, and willing to work with the Chamber.

I would want them to be more proactive in protecting the environment we have rather than pushing a climate action plan that is not feasible and can’t work.

Then there is the question if I would want a new, younger candidate rather than an older one with much experience in government.

This is a tough one.

I’m so old that when I was born, the Dead Sea was still sick.  Yup, I am a Baby Boomer and proud of it. But is it time to put ourselves out to pasture and let millennials take the reins?

After attending a candidate’s forum conducted by XYZ Sedona (a group of Sedonans that identify with the X, Y and Z generations) I realized these relatively young people are just itching to take Sedona into the future.

Should we let them have a go at it?