Discover Arts: ‘Raphael: The Lord of the Arts’
premieres in Sedona Oct. 29

Sedona AZ (October 19, 2017) – Sedona International Film Festival presents the Discover Arts series with “Raphael: The Lord of the Arts”. The event will show in Sedona on Sunday, Oct. 29 at 4 and 7 p.m. at the festival’s Mary D. Fisher Theatre.

“Raphael: The Lord of the Arts” is the first film adaptation of the life and work of one of the most famous artists in the world — Raphael Sanzio.

Few figures in the history of art have lived a life so full of intensity and fascination quite like Raphael Sanzio. He died aged just 37 and yet managed to leave an indelible mark on art. In a well-balanced dialogue between historical reconstructions and artistic commentary, the film retraces the most significant moments of Raphael’s life. 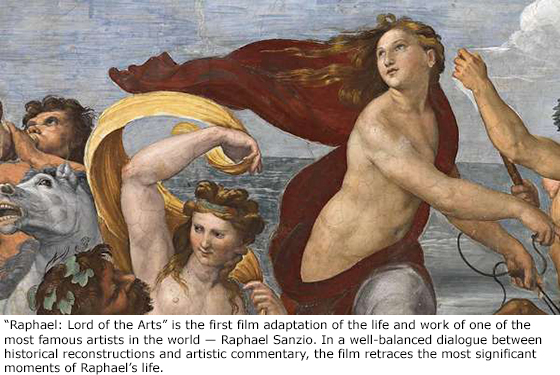 Expert contributions delivered with feeling by great art historians Antonio Paolucci, Vincenzo Farinella and Antonio Natali, enrich the story of the life and work of the artist. The film is set in 20 locations, two of which are major exclusives — the Vatican Logge and Cardinal Bibbiena’s apartment in the Apostolic Palace — and shows over 70 works of art, among the most famous and most representative of Raphael’s entire work.

Raphael’s life was as unforgettable as his art, and this film tries to tell the story of it by retracing his steps from the early days in Urbino to the glorious period spent in Rome, which represent the peak of his life and career as well as its epilogue.  It is an intimate dialogue between the artist’s life and his work, unfolding through interesting, expert commentary from famous art historians, and fine historical reconstructions, veritable tableau vivants inspired by 18th Century paintings depicting Raphael during the most important moments of his life.

The film starts off from the family home in Urbino, where Raphael as a child learned the first rudiments of art, and then move on to the Palazzo Ducale, where as a young boy he first came into contact with the great masterpieces of the era.

The journey continues through to Florence and the unforgettable years in that city when you could meet both Michelangelo and Leonardo at the same time, and where Raphael produced a series of famous Madonnas, from Madonna del Cardellino (Madonna of the Goldfinch) to the Belle Jardinière (Madonna and Child with Saint John the Baptist).

And, ultimately, theater audiences end up in Rome, the city that consecrated his art and made him a legend for all time.  In the Vatican, the film celebrates the famous works that are part of the Vatican Museums: the Raphael Rooms, the Madonna of Foligno, the Coronation of the Virgin and the famous Transfiguration. We are also taken to exclusive rooms inside the Apostolic Palace, private places not open to the public, that make an impressive visual impact: the Vatican Logge and the apartment of Cardinal Bibbiena.

Beauty comes to life in a crescendo through the brushwork and enduring genius of one of the most talented artists the world has ever known in “Raphael: The Lord of the Arts”.

The festival is proud to be the official host of the Discover Arts series, joining hundreds of theatres around the globe for this special exhibition on screen. Cinema guests can now enjoy unprecedented high definition access into the lives of renowned artists, their art and the fabulous museums and galleries that are the custodians of such masterpieces.

“Raphael: The Lord of the Arts” will be shown at the Mary D. Fisher Theatre on Sunday, Oct. 29 at 4 and 7 p.m. Tickets are $15, or $12.50 for Film Festival members. Tickets are available in advance at the Sedona International Film Festival office or by calling 928-282-1177 or online atwww.SedonaFilmFestival.org. Both the theatre and film festival office are located at 2030 W. Hwy. 89A, in West Sedona.