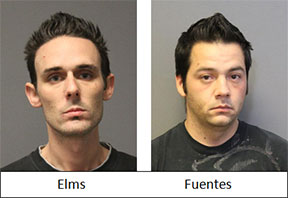 In the last few days, a YCSO detective initiated an investigation into use of a stolen credit card taken during a theft from a Rimrock home. During follow-up contact with the 74-year-old victim, the detective learned that not only was her credit card and some cash stolen, but she discovered jewelry missing after filing the original report. With assistance from the reporting patrol deputy, the detective contacted a local merchant where the stolen credit card had been used and reviewed surveillance video of a transaction showing 2 male suspects. When the victim was show still photos of the suspects, she recognized them based on contact a few days prior. Both suspects had been in her home soliciting a new business called “Clean to Profection.” She quickly identified Fuentes whom she also knew from prior contacts and recalled the second suspect had the first name “Steve.”

Lesson – This media release highlights a lesson for seniors that you should not let anyone in your home to solicit anything without some background knowledge regarding the individuals. Even then, it might be a risk. Always consider having a family member, friend, or neighbor present in such instances. Never let “solicitors” wander out of your sight. As is typical with situations like this, the suspects will employ distraction techniques to allow the theft of valuables from the home without the resident seeing the illicit activity. Many times, offering a “home repair service” is the ruse that gets rip-off artists access throughout the house and the valuables inside. If you doubt the validity of anyone at your door, ask them to leave. If they refuse or continue to pressure the solicitation, call law enforcement.

The detective went to a Flagstaff area WalMart where the stolen credit card was used on the evening of December 6th. During a review of security video, both suspects were seen entering the store with Elms purchasing a tablet computer on the victim’s credit card.

About 20 minutes later, the suspects returned to WalMart and Fuentes filled a shopping cart with all kinds of camping supplies charged on the victim’s card. While in Flagstaff the detective traced some of the victim’s jewelry to a local business and confirmed that Fuentes had pawned those items. This property was recovered. The detective also confirmed use of the stolen credit card at a gas station in Munds Park. At that location, the suspects were seen on surveillance video in silver 1985 Chrysler New Yorker registered to Elms.

Further investigation revealed additional stolen property was pawned in Prescott and Cottonwood and those items were also recovered.

On December 9th, the detective was notified that the suspects were inside a Cottonwood area pawn shop. Both were eventually detained by YCOS deputies for the detective. During consent search of Elms’ Chrysler vehicle additional stolen property was recovered including stolen mail connected to multiple locations in the area. Both Elms and Fuentes were arrested and charged as indicated and have since admitted to the activity as described. The suspects even indicated they entered the victim’s home several times while she was away.

Preliminary loss estimated regarding the victim in Rimrock is nearly $2000.

Detectives are looking into the involvement of these suspects in additional crimes. If anyone has information regarding Elms and Fuentes related to this case or other thefts, please contact Detective Swaim at 928-567-7710. Refer to case number 14-043534.

The investigation into mail theft has been turned over to the US Post Office, Postal Inspection Service.